In the temple devotees apply tilak of Sindur to their foreheads from the Hanumans body, because it is considered to be good luck. There is a short story for why the body of Hanuman is covered with Sindur in temples. God Ram's wife Sita was applying sindur to her head and when Hanuman asked about why she is doing so, she said that this would ensure a long life and her love for her husband Rama. Hanuman tarnished his entire body to prove that how much he loves Ram and for Ram's immortality. That's why in temples the body of the Hanuman covered with Sindur. 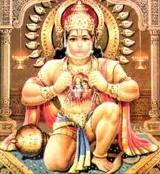 In the Southern part of India, like Tamil Nadu and Kerala, the Hanuman Jayanthi is celebrated during the Tamil month called Margazhi (Decmber 15 to January 14). According to south they celebrate this Hanuman Jayanthi during this time because they believe that Hanuman was born on Moola Nakshatra and also in Amavasya during the Tamil month of Margazhi. During this day in Chennai, in Hanuman temples priests are doing lots of poojas and archanas on behalf of the Hanuman devotees. In Chennai Anjaneya temples people also orange for special poojas for their good health and life. During Hanuman Jayanth in Chennai Temples are crowded with devotees to worship God Anjaneya, shows how much this Vanara God took an important place in their life by making all their wishes come true.

There are various specialty of dance available and the importance for the dance is given in the special occasions and during the dance festivals. Various aspects of the Dance festivals are discussed in this particular post.

Karthigai Deepam is being celebrations are done in a very great manner in the Chennai by Chennai people.

This resource contains a powerful Anjaneya Slogam that is more powerful and useful for getting blessing from Lord Hanuman.