At merely 19 years old playing his first IPL in the year 2013, he took the wicket of giant Chris Gayle in his very first ball endorsing his name in IPL history. Hunuma Vihari started his first class cricket career at an age of 16 years playing for Hyderabad as an all rounder. 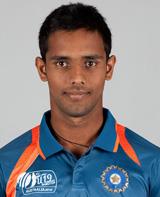 First-class debut of Hanuma Vihari was in the match Jharkhand v Hyderabad (India) at Ranchi on Nov 10-13, 2010. Till date he played 15 first class matches making 743 runs in 23 innings with 1 century and 2 half centuries and highest being 191 runs and took 4 wickets.

Before his first IPL match he played 8 T20s and made 106 runs with 34 highest and took 5 wickets.

Being the young blood, Hanuma Vihari has a long career ahead for Hyderabad, Sunrisers as well as for India in future.