About Lord Ganeshji: The First Holiness

Ganeshji is the first holiness lord in the Hindu religion. He is the son of Lord Shiva (Shankar) and mother Parvati. The lord Ganeshji sits on a "Moosak" (rat) and which is the vehicle of them. The "Motichur Laddu" is the favorite sweet of Ganeshji. He is a powerful and naughty lord. "Ridhi and Sidhi" are two wives of lord Ganeshji. Kartikey is the younger brother of Ganeshji. There are two famous Ganeshji temples in Rajasthan. First is Ranthambhore, Sawai Madhopur. And second is Moti Dungari. 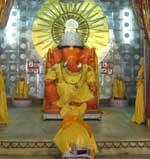 Why is the Ganeshji first holiness

This is a legendary story. At that time mother Parvati has no son. One she was bathing. At that time she has an idea to generate a son. So she started to make an idol of a child by her scum. After completing the idol she invigorates the life in the idol and says him to watch the door. After some time lord Shiva becomes the bathhouse then Ganeshji stop him and say to go back. By this event Shiva become angry and attack on Ganesh. In this fight Shiva cut the head of Ganeshji. By hearing this noise mother Parvari come to outside of bath house and saw her dead son. She started to cry and beg for her son's life to the lord Shiva. Shiva attaché an elephant head to the torso of Ganeshji. After that he became "Gajanan". The lord Shiva gifts him that he will always worship before every work and every God.

According to the priests of temple and elder citizens, the king of Mewar manufactures a huge idol of Lord Ganeshji. He took this idol in a bull cart and walk away. He decides to build a temple for this idol at the first place where he will stop. After walking for a long way he stop near the moti dungari where the temple of Ganeshji is situated at this time. After that a businessman took the responsebility to build the temple in the in the inspiration of Mahant Shiv Narayan.

About the idol of Ganeshji

The idol of lord Ganeshji is in sitting posture. Trunk of elephant headed Ganeshji is towards his left hand which is considerd very aspicious. He taken the dishes of "Motichur Laddu". According to Hindu Religion, Ganeshji rodes on a rat. So a big idol of of his ride rat is placed in front of the idol of Ganeshji. Both idols are paste with "Sindoor" known as "Chola". At every month of "Ganesh Chaturthi" this "Chola" replaced by the priests of temple. 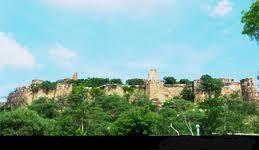 Ganeshji in the hearts of peoples

Ganeshji hardly lives in the hearts of citizens. At every morning and evening thousands of devotees come to the temple. On the occasion of Ganesh Chaturthi a huge fair organized. In this fair lacks of peoples gathers. If people have starts a new business or they buy a new car or vehicle then every devotee comes to the temple and makes a Hindu Holy Sign "Swastik" on that vehicle. The "Swastik" is made by the "Sindoor" of "Chola" of Ganeshji. After that, deposit offerings to Ganesha's devotees are like vermilion "Sindoor". They starts their day by seeing the idol of lord Ganeshji.

How to worship the Ganeshji

Devotees of lord Ganeshji worships him with the red clothes, red flowers, red Chandan, Akshat, Ghee lamp, Navaidhya, Dhoop, yellow motichur Laddues. After that keep an odol or poto of lord Ganesh ji on a "Pidha". Devotee can take a mala of Rudraksha, Crystal or Red Chandan.

Occasions and fairs at the temple