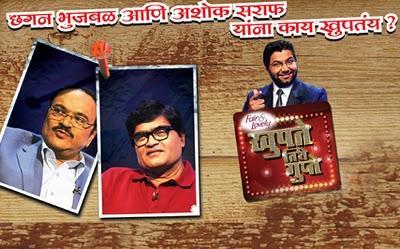 Song Director and Music Producer and is also widely known for his witty comments and sense of humour. So, just get ready for this laughter ride fast as in the very first episode Khupte Tithe Gupte we are going to have the eminent politician Mr. Chhagan Bhujbal along with a senior and versatile Marathi TV personality, Mr. Ashok Saraf.


So what more, get ready for Fair and Lovely Khupte Tithe Gupte TV Show and enjoy yourself!

How to Get Marathi TV Channel Star Prabah

If you are hooked to Marathi shows and yet to get Marathi Entaintainment Channel Star Prabvah then Read on to know.

See detailed information about new action TV serial by VG Production Metro Police. You can get updates of TV serial Metro Police, cast and crew, story and other details.