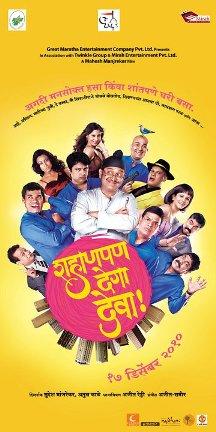 The story of Shahanpan Dega Deva Marathi Movie is very much heart touching and we must praise the directors for preferring to make a film on such a sensitive but necessary issue. The Shahanpan Dega Deva movie plot is based on the subject of mental disorder. Various personality disorders, that compromise the main theme of Shahanpan Dega Deva Marathi movie, have been skilfully portrayed here. In the midst of a complete mess up, people will adopt other people's identity, forgetting everything about his own. Thus, in this movie, Bharat Jadhav will think himself to be a doctor, Ankush will identify himself as super stars, Sanjay will think himself to be a cricketer and so on. But the funniest part is when the Fu-Bai-Fu winner Vaibhav Mangle presume the identity of God and Siddharth will be His Messenger. Mahesh Manjrekar is here the doctor, treating all these patients.

However, it looks like that the plot of Shahanpan Dega Deva Marathi Movie have been influenced by a number of sources. The first thing that will come to our mind is William Shakespeare's A Midsummer Night's Dream. To some extent it also resembles The Changeling by Thomas Middleton and William Rowley, more so when we see so many lunatics revealing sinister truths of identity disorder underneath the apparent comedy and banter. Even in recent times there have been a number of plays and movies on this theme, and we can remember the famous Bengali film Subarnagolak (1981) on almost the same theme of toggled identities.