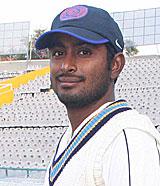 Price of Ambati Rayudu in IPL 2011:Since Ambati Rayudu was an uncapped player, he was purchased by Mumbai Indians for an undisclosed price.

The rubber manufacture giant Bridgestone has signed with the Mumbai Indians cricket team in the IPL 4 2011. Read more!

We are here with complete biography, profile of R. Sathish, the Mumbai Indians batsman in IPL 4 2011 from Trichy, tamil Nadu