Shradha Sharma, Big Boss 5 contestant or participant, is a well known actress in the Hindi television industry as well as a model. Actress Model Shradha Sharma will definitely add glamour and attraction to this reality show and is one of the officially confirmed final Big Boss 5 inmates. The acting career of Shradha Sharma began almost in her childhood as she had widely been trained and participated in multiple theatres right from her childhood days. Shradha Sharma is also a good dancer. 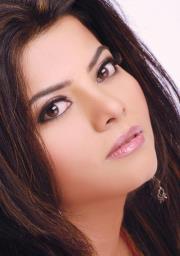 The acting career of Shradha Sharma in the silver screen began with serials. She played a leading role in the Sahara One serial Suno Har Dil Kuch Kehta Hai. Later she also did a lead role in Star Plus channels' Hindi TV serial Saarthi. Later she moved on to films. She acted in a Kannada movie called Jeeva. Shradha Sharma has also done dance shows and performances in many places. At present she is enacting in the film Tumhara Pyaar Meri Zindagi. Soon, a Shradha Sharma music video entitled Chickni Chick will also be released.

Sorry, Shradha Sharma personal mobile phone number is not available. However, you can send her an email through