Juhi Parmar belongs to Ujjain, Madhya Pradesh. She became a popular figure and a household name after she came in Balaji,s TV serial KumKum as title role. Juhi Parmar was stunning beautiful and saas bahu serial licked her image as a next door neighbour.

Juhi Parmar did many shows and now married, she continued doing TV shows and reality shows even after marriage and was out of screen for last few months as she was pregnant. Now she is again on TV in mega show Bigg Boss. 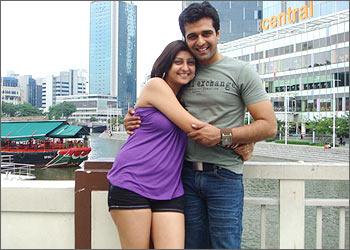 Juhi Parmar acted in many TV shows. Kumkum was the megahit show which provided her name and fame. She also appeared in a TV serial Shaheen and Devi on Sony TV which was not as famous as Kumkum. Juhi Parmar did few Pakistani serials too and some of them are Pehchan and Tere Ishq main.

Juhi Parmar also appeared in shows like Comedy Circus and was winner partnering with VIP. She was host in Antakshari and was also in Nach Baliye. Juhi Parmar along with her husband participated in show Pati Patni aur Wo. She also did show Maa exchange. Apart from these Juhi Parmaar appeared in serial Ye Jeevan hai on Starplus, Yeh Chanda Kanoon Hai on Sab TV,Woh on Zee TV, Virasat on Saharaone, Say Shava Shava dance reality show on NDTV imagine, Saas v/s Bahu on Sahara one and many more. She also made special appearance in many TV shows. Thus Juhi is well known figure in TV industry.

Juhi Parmar is bold and beautiful and won Miss Rajasthan title in 1999.

Husband of Juhi parmar is Sachin also a TV actor and popular figure in TV industry.

Nihita Biswas came in limelight after marrying bikni killer Charles Shobhraj who is about 44 years elder to her. Now Nihita Biswas is in Bigg Boss house. See biography, profile, her love story and other information of Nihita Biswas contestant of Bigg Boss season 4.