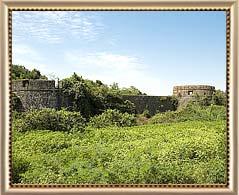 Ahmednagar Fort is one of the best forts in the state of Maharashtra. This fort is situated in the Ahmednagar District. It was built by Hussain Nizam Shah in the year 1559. This fort lies in the eastern part of Ahmednagar city.

Ahmednagar Fort is one of the most popular attractions of the region. This fort is approximately 140 Kms. from Nashik city.

The Ahmednagar Fort is oval in shape and has a circumference of 1.75 Kms. The huge and strong cut stone wall of this fort reaches to a height of 25 meters from the bottom. We can see two entrances to the fort. We can see 24 Citadels and a moat that is 30 meters wide and 4 to 6 meters deep. The entrances to the fort can be reached only after we go over the moat through suspension bridges.

Ahmednagar Fort is presently under the control of the Military command of India. The Mughal army invaded this fort in the year 1596. The second attack my Mughals was led by Akbar in 1600. In the year 1759, the Mughals lost control of this fort and they sold it to Sadashiv Bhau, the cousin of the third Peshwa.

Daulatrao Shinde gained control of this fort in the year 1797 but he also lost it to General Welleslay in 1803. The history of <>b>Ahmednagar fort tells us that it was used as a royal prison a number of times. During the Quit India movement, the entire Congress working committee was detained in this fort in 1942. This historical place is a must see for all the visitors who visit Nashik.