Mahi Vij is bold and beautiful television actress and had done several TV serials, music albums and commercial ads. This hot Punjabi girl basically hails from Delhi and came in limelight after a music album Dil dil hai wahi tumne jise apna kaha. Mahi Vij ruled the television industry as aprt from the God gifted beauty she showed her acting talent as Nakusha in TV serial Laagi Tujhse Lagan. Education of Mahi Vij was from Delhi but now she is settled in Mumbai, Maharashtra after marrying Jay Bhanushali in 2011.

Biodata and personal information of model and actress Mahi Vij 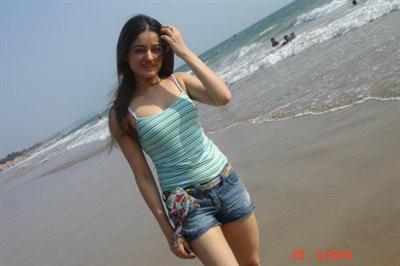 style='padding:10px'>
Age of Mahi Vij - 30 years, birthday of Mahi Vij in on 4th April 1982.
Address of Mahi Vij - Originally she is from Delhi but presently residing at Mumbai, Maharashtra.

Mahi Vij marital status, love story, dating partner or boyfriend - Mahi Vij is married to Television actor Jay Bhanushali. Love story of Jay Bhanushali and Mahi Vij started on the set when they were shooting for a serial. Marriage date of Mahi Vij and Jay Bhanushali was on 11th November 2011 and recently they have celebrated their first marriage anniversary.

Mahi Vij height and vital stats - Mahi Vij height is 5.1 and inspite of being short her body structure is attractive. She is hot and gorgeous model and also a good actor and dancer.

Mahi Vij appeared in many TV serials, music albums and commercial ads. She also featured in a regional movie Aparchitam a Malyalam movie in 2004 in which she played the role of Kalyani.

Filmograghy of Mahi Vij
Aparchitam in 2004 (Malyalam movie)
She also appeared in a music album.

Apart from that she participated in a dance reality show Jhalak Dikhla Ja season 4 and impressed judges by her dancing skill.

Mahi Vij and her spouse/husband in Nach Baliye season 5

The most ideal couple of Nach Baliye season 5 is Mahi Vij and Jay Bhanushali. Mahi is a good dancer and she had proved in Jhalak Dikhla Ja and Jay Bhanushali as well can dance. Both have a huge fan following and their fans will be eager to see them together dancing with wonderful chemistry.

Charlie Chauhan is bold and beautiful and known for her carefree nature and her flamboyant. She is an established television actress and dancer Kumwar Amar of Dil dosti dance fame. They both are celebrity pair as contestant in dance reality show Nach baliye 5. See details about Charlie, her boyfriend and her TV serials and shows.

If you are interested to know about Bulgarian model Elena Boeva, of TV actor Kushal Tondon, here you can see detail biography, personal information, biodata and love story of Elena Boeva, contestant of Nach baliye season 5.

Gorgeous Nisha Rawal is well known face on TV as she has appeared in many ads, TV shows and even movies and is now married to TV actor Karan Mehra. See details about personal life, love story, marriage and as contestant of Nach Baliye season 5.

Suhasi Goradia Dhami is a well known face in television industry and had featured in many Tv serials and shows as well as in few movies. See details about personal information, marriage, husband, filmography, Tv serials and other interesting things related to her.

Remember Shefali Zariwala, a girl created sensation with her album Kaanta Laga. Later rumor for her death, then marriage and divorce came in news. Here is details about her personal information, marriage, divorce , boyfriend, albums and future .