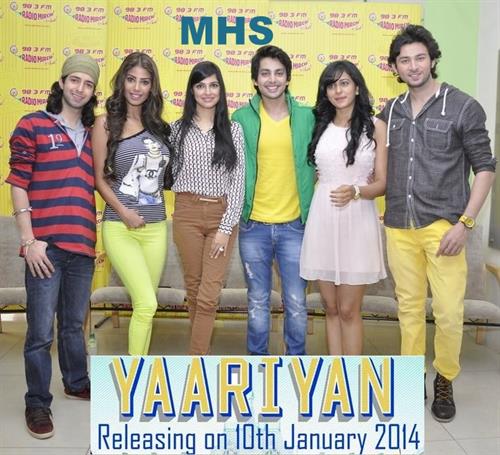 Yaariyan is an upcoming movie releasing on Friday 10th January 2014. This film was announced to be released on 31st January 2014 before but the released date has now been changed.

All the starring in the film are fresh and new in the film industry even the director of the film giving her debut through this film to the Indian film industry. It will be very exciting to watch the film with all new young star cast along with very refreshing music of the film.

The story of Yaariyan swirls around the bond among the 5 freinds in St. Bede's College, Shimla, living and enjoying their student life with all the fun around and the beauty of that place. Yaariyan is all about relationships, fun, mistakes and friendship. All masala thing of young generation shown in the film through the various parts of the film like soundtracks, shots etc. Providing more attention of youth towards this story. In the young age how all first things like loving first time, first time exciting challenges, first time kiss, managing responsibilities first time about family and nation etc. happens in the life of those 5 friends attracts the viewer.

The music of the film has been given by Pritam and one of the best numbers "sunny sunny" and "ABCD" by Honey Singh making audience dance on their feet. After the big success of 'Tum hi ho' Mithoon giving tracks in the film which really are on the everyone's lips.

College romance and adventure of the 5 friends res the fun which had by viewers whether they are young or old. This is totally masala film having emotion, romance, fun, dance, music everything which will force people to make their pocket loose the money.

Promotion of the film has been going on at the top of its highs. All the star cast visiting different TV programs and showing the glimpse of fun which will be seen in the film by audience. Recently the star cat of Yaariyan was present on the stage of "Boogie Woogie". They danced on one of the popular song "sunny sunny" of the film and also made the entire participant dance on it.

Along with the release of Yaariyan Madhuri Dixit's dhamakedar comeback film Dedh Ishkiya is also releasing on the same day. There are same chances to get hit and same to lose in this weekend but any ways audience are the last source to decide for winner and loser in this case.
The movie which is full of fun, emotions and entertainment must be seen and enjoyed, so get ready for "ABCD" in your life.