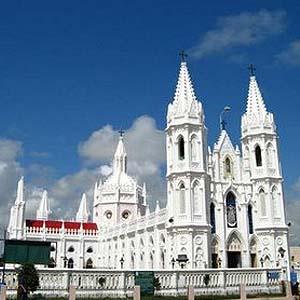 San Thome is the French name for Saint Thomas. He was an apostle of Christ and visited Madras around 52 CE. In 78 AD he was killed and then interned on the San Thome beach. A church was built there to preserve his mortal remains. Later, a new church was built and the relics were all shifted to the new San Thome Cathedral Basilica. In 1606, the San Thome Church was reconstructed in a greater scale and it received the upgradation of a basilica in 1896. There are a number of wonderful stained glass windows in this basilica, depicting the story of St Thomas. The 14 wooden plaques in the central hall highlights the final days of Christ.

St. Mary's Church Chennai is the most ancient Anglican Church of India. It was constructed in 1680. Also, the tombstones in its graveyard are the oldest of their kind in the entire country. The wedding of Robert Clive was solemnized in this church.

The CSI Holy Cross Church is more than 120 years old and was originally called the Perambur Railway Church, as it was under the Railway authorities earlier. The congregation at the Church consisted predominantly of Anglo-Indians of the city though there are families from other states now.

Most of the temples in Tamilnadu are built because of some specific reason. In the same way the Great Tanjore big temple was also built with some particular plan by the great King Raja Raja Chola before 1000 years.