Tanjore peruvudaiyar temple is one of the culturual significance and symbol of Chola Architecture. It is popularly known as Periya Koil and also has the name Brihadeeswarar Temple is situated at Tanjore the Rice gallery of India is the world's first completely built out of granite temple and brilliant example of the immemorable heights achieved by Chola Kings in architecture. It is a tribute and reflection of the power of kingRaja Raja Chola I. It remains as one of the greatest glories of Indian Architecture. The temple is a part of the UNESCO World Heritage Sites.

The temple'sfoundation was laid out on 1002 A.D by the Tamil great emperor Arulmozhivarman popularly known as Raja Raja Cholan I. The temple was built by him as one of the graceand glory to the throne of empire. This temple was built to be the royal temple to display the his power and his relationship to the universal order. The temple was the site of the major royal ceremonies such as anoninted the emperor and linking him with its deity Lord Shiva. The temple maintained a staff of 600 people in various capacities , besides the brahmin priests thes eincluded record keepers, musicians, scholars etc. The inscriptions that found in the compund wall, describe that the temple has a big platform for the traditional BarathaNatyam Dancers. Finally the construction was finished in 1010 A.D.

The temple complex is situated on the bank of a river that was made to make a moat aroud the complex's outer walls. The massive main Shikara is 63 metres high and 16 severely articulated stories and dominates the main quadrangle. Pilasters, Piers, and attached columns are placed rythmically covering every surface of the shikara. 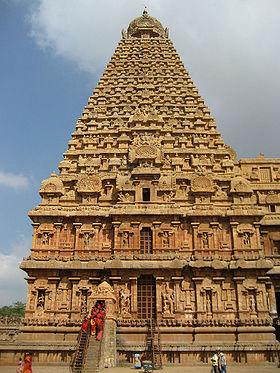 The main temple is at the center surrounded by a big nandhi carved out in a single stone, a andapam of 400 pillars, and shrines. Inside the temple is the shrine of Lord Shiva in the form of Linga. The massive walls of the temple contains many sculptures containing the words of history of tamil kings and literature. The temple also has seperate part for Navagrahas such as sun,moon and saturn etc. This temple reflects the dravidian architecture style.

Surrounding the main temple are two walled enclosures. The high outer wall is hgh defining the temple complex area. Here is the massive gopuram or gateway. Within this a portico , a barrel vaulted gopuram with 400 pillars is enclosed by a high wall interspersed woth huge gopurams. It also has a shrine of ganapathy and statues of other form of lingas.

How to reach Brihadeeswarar Temple of Tanjore

Thanjavur is at the centre part of Tamilnadu lying mostly in the Kaveri Delta. It can be easily accessed by road, rail and if wished by Air also. There is a national highway connecting Thanjavur with various parts such as Trichy, Madurai and Chennai etc. The nearest airport is at Trichy which is at a one and half an hour travel from the city. The government has also laid new rail route from chennai and introduced trains in this Route. There are several deluxe buses promoted by government in this route.

Brihadeeswarar Temple has turned 1000 years old and to mark the 1000 years of its marvellous structure and grand architectecture. Hence the state government has planned to organise a programme called Bharathanatyam Yajna, a classial dance show under the dancer Padma Subramaniam and music shows with comoetetions of prizes nearly one lakh cash. It is a joint venture held by Association of Bharatnatyam Artists of India and Natyanjali Trust, Thanjavur. To mark the 1000th year 1000 dancers from New Delhi, Mumbai, Pune, Tamilnadu, Andhra Pradesh, Karnataka, Kerala, Singapore etc. The town was turned in to big place for crowd on 26.09.2010. All these are organised by Hon.chief minister M.Karunanidhi on behalf of the government.

Raja Raja Chola did all the great things to this world with the instruction given by his guru only. In this resource the painting that describes Raja Raja Chola along with his guru is described.

Battle field is not the only place for the great kings there are also many other aspects in which the talents of the King is reveled.