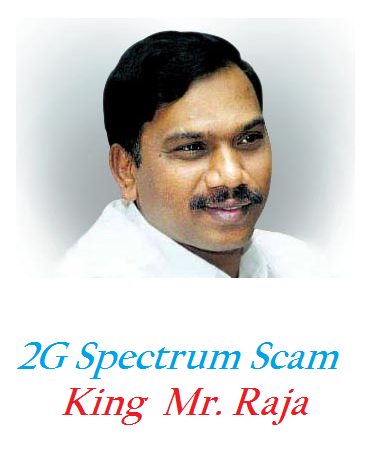 Many enquiries went on regarding 2G spectrum scam done by DMK Telecommunication Minister Raja. In Tamilnadu 2011 elections will be the turning point of DMK's future. This will be determined by the reports of 2G scam. In the month of September 2010 Indian Supreme court passed the notice to Telecommunication Minister Raja about status of issuing mobile licences in India. Raja gave many mobile companies licences without following regulations of Telecommunication authority. Due to this India faced huge amount of money loss. Supreme Court insisted Central Bureau of Investigation known as CBI to start the proper enquiry regarding 2G spectrum scam by Raja. When this issue was started opposing parties in India started demanding the ruling government to make the resignation of Telecom Minister Raja. But the ruling Congress and DMK rejected their demands.

Even Chief Minister of Tamilnadu Karunanidhi avoided the resignation of spectrum Raja. Later CBI raided the personals related to 2G issue in India and also in Tamilnadu because of this raid many citizens of Tamilnadu realised the importance of 2G spectrum. The political parties in Tamilnadu already started using this Raja's 2G spectrum scam as a key point for elections 2011. Many in Tamilnadu feels this issue will definitely bring the status of DMK to the down fall. Still many persons who are involved in this 2G spectrum scam will be brought out by CBI very soon.
Finally after the many day investigations done by CBI of Raja's 2G scam 02/02/2011 Wednesday arrested Raja. Still we are expecting many scam related to this 2G spectrum will be revealed by CBI soon. This CBI arrest of Raja will change the DMK future.

Relentless struggle of opposition parties and the intervention of Supreme court lead to the arrest of Raja.until that time Dr kalaignar supported Raja by painting him as Dalit and opposing him is anti dalit action according to him.Dr Man mohan also defended him that there is nothing wrong in 2G. Kapil Sipal vehemently told that there is no loss of single rupee.Now also Dr .Man mohan and Kalaignar openly say in parliament and in the General Council of DMK that it is just like subsidy to food products etc to reduce the cost of mobiles.They think that the people of India are all child like .
Now the ruling class has come to a state that the corruption is their birth right and questioning against them is anti national.
people of TamilNadu should teach a lesson cong and Dmk alliance in the coming election