Aadhi stareer Aravaan is the new tamil movie which is released today and is one of the most awaited films in tamil film industry due to its unique storyline. Adhi is seen in a new avatar in this movies which will take him to places in tamil film industry. The film also has Dhansika as the lead pair to Adhi. Dhansika has also done a neat job in this film. The film also has special appearance from Bharath and Anjali. The story review and artist performance are given in detail below. 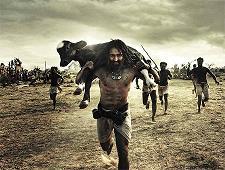 Aravaan is the story based on a novel Kaaval Kottam by Su. Venkatesan. The story is set in the 18th century which depicts the history of madurai during that period. The story is about a ordinary person named Varipuli and the extraordinary skills that he possess. Dhansika plays the role of Vanapechi and is the lead pair opposite to Aadhi. The film also depicts the culture and the lifestyle of tamil people during the 18th century. The story stretches to about two villages in madurai which has always been in conflict with each other. The story revolves around the two villages and the main character varipuli and his dare devil skills. The story is a action-drama genere which will surely interest the tamil film viewers.

Performance of the artists in tamil movie Aravaan 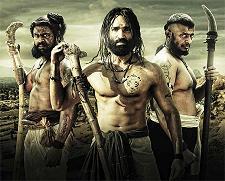 Aadhi in the lead role plays the role of Varipuli and has done justice to his role. If you can recollect his roles in Mirugam and Eeram you can say that he has matured into a good actor. His height and physique fits him into the role of Varipuli. You can see the dedication and pain that he had induced in his character that makes Aravaan a good and neat movie.

Dhansika plays the opposite pair with ease. The nature of the role Vanapechi requires her to complete any task that comes in her mind. She has shown great promise to the role and it would be a milestone in her film career.

Pasupathi yet again shows his talent in this film. It was Vasanthabalan who cast him as the lead pair in his film Veyil. Pasupathi comes out with a superb show and did not disappoint the director.

Anjali and Bharath do a special appearance in this film. Archana Kavi, Kabir Bedi, Karikaalan, Singam Puli and Vijay Chander had also done their part well in this film.

Karthik who we all know as a well versed singer is the music director of this film. It is his debut film as a music director. He impresses in the film with his background music.

The film is produced by Siva under Amma creations. Vasanthabalan had weilded the script along with the direction. 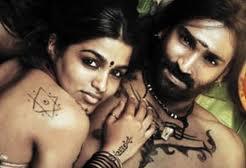 Camera work from Siddharth is excellent where he captures the Arittapatti Hills in melur with great effect. The mountains , caves and terrains are a treat to watch in this film. Kudos to Siddharth for making this magic.

Praveen and Srikanth had done the editing and made sure that the film is well paced and does not lag behind in any manner.

Last but not the least the script and direction by Vasanthabalan is excellent.

My final Verdict for the tamil movie Aravaan

Overall Aravaan is a good and neat movie which depicts the story of 18th century in a structured manner. Aadhi's acting has improved a lot and is sure to go many places in Tamil industry. I would rate the film 4 out of 5 points.