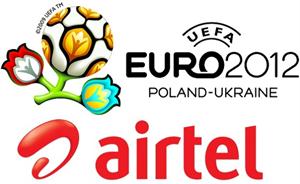 
UEFA Euro 2012 matches starts on June 8 and they will get over on July 1. Video rights to broadcast the matches in mobile was purchased by Airtel network. This offers user to enjoy their matches online in their mobile.

At the same time Airtel also offers you to download football video games just for Rs.99 to enjoy in your phone. You can also get the UFEA videos, football player wallpaper and football animation. This packages will be intimated through SMS once you activate the live streaming UEFA 2012 pack.

Airtel GO! GO! GOAL Contest is now available for the Tamilnadu subscriber too. This contest is a quiz about UEFA Euro 2012 consists of three question. Winners were awarded with Sodexo Voucher worth Rs.1000 is daily prize, Samsung Galaxy mobile worth Rs.9000 is a weekly prize and finally free trip to Manchester United.

How to get airtel 3G datacard connection in Chennai, Tamilnadu

Airtel 3G datacard is becoming more popular in the recent days. The speed, compatibility and easy accessible and freely available all these features makes airtel 3G datacard a step ahead with all other telecom company. Airtel also released the broadband connection for which just dial 9566227344 to get the connection in Chennai, tamilnadu.

Airtel Money is a new Application that has been recently launched in the market by Airtel.Airtel has a rich set of Customers and in order to make the shopping of its customer more flexible it has introduced Airtel Money. This type of application is not only for existing Airtel User but to any people who like to shake their hands into this scheme. Read more to get to know various details related to schemes, plans and registration and documentation related to Airtel Money.Happy Reading.

This article gives in brief about the details of Bharthi Airtel, one of the top class mobile operators in Tamil Nadu.

How to get an Airtel Connection in Tamilnadu