The Rivers and its history in Tamil Nadu

The Rivers are the primary resource for getting the water supply. The adequate supply of safe water is essential to human lives and it is required in day to day life. The rivers are arising in the forest and it comes to various places to the State by travelling hundreds of kilometers. There are many rivers available in the state Tamil Nadu. They belongs to various categories like small, medium and large in size. The famous rivers in Tamil Nadu are Kavery river, Vaikai river, Thamirabarani river, Noyyal river, Amaravathi river, Bhavani river and Siruvani river etc. The birth place of some rivers may also be some other states like Kerala, Karnataka and Andhra. They are arising in some other states and travels many kilometers and finally it comes to our state. In the beginning, all the rivers was so good and gave safe water to drink to the people of Tamil Nadu. Now, many rivers in Tamil Nadu had been polluted by the wastage released from the factories and industries. These wastage's are mixed with the river waters and make them as polluted water.

The polluted rivers in Tamil Nadu

There are many rivers running in the state. They provide the safe water to drink by making storage in the Dam, irrigation facilities to the agricultural land and safe life to fishes. But, some rivers in Tamil Nadu got pollution due to various reasons. The maximum polluted rivers in Tamil Nadu are listed below. 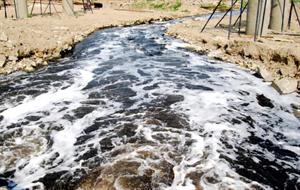 The Cauvery river in Tamil Nadu : The Cauvery river is a very big river in Tamil Nadu which comes from the state Karnataka. It is a major resource for water supply in the state. This river flows through many places in various districts of Tamil Nadu such as Erode, Karur, Trichy and Thanjavur. This river has been polluted by mixing the discharge of wastages from the leather and paper industries in Erode. The district Erode has many leather factories and paper industry. They are mixing the factory wastage into the river. These wastages are making the river waters as polluted one. While the people are drinking this polluted water, they have affected by many diseases including skin diseases

The Noyyal river in Tamil Nadu : The most polluted river in the state Tamil Nadu is known as the Noyyal river. This river is very famous in the Coimbatore and Tirupur district. This river is very important resource for drinking water and irrigation in the above said districts. The city Tirupur is very famous for textile, cotton and knitting items. There are many dying and bleaching units running in this city and they produces more and huge wastages in every day. These wastages are directly mixed with the Noyyal river while it flows through Tirupur.

The crisis and problems arises by polluted rivers in Tamil Nadu 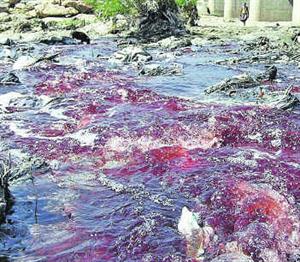 There are many problems arises by polluted rivers while they are consumed by the people for various purposes. They are give below.

3. The underwater animals like fishes are facing enormous problems due to this polluted river water and some times the cattle are drinking this water and leads them to die.

4. The capacity and quality of the ground water decreases due to the polluted river water and this may also affect the water table of the earth.

5. The environment is also being damaged day by day and at certain stage we will not even get a drop of fresh water to drink.

6. The entire water cycle is also affected by this polluted river water.

How to keep the river water unpolluted in Tamil Nadu

As a responsible citizen of India, It is the duty of every people in Tamil Nadu to protect the river water from the pollution. The steps to make the river water as antipollution are given below.

2. The industries and factories may run their units in some other places where the river is not flows in the state.

3. The peoples themselves should take care by avoiding through away their day to day wastages. The peoples those who are living in the river banks should also protect the river water from the pollution.

4. The government should implement proper laws and protect the river water in a appropriate manner.

Are you looking for the Dams that were built to stop water to Tamil Nadu? In this article I have given the details of the various rivers and dams that are located in the neighborhood states of Tamil Nadu. I have also stated the reason why the rivers were stopped from Tamil Nadu. I have given the details of the rivers like Kaveri, Mullai Periyaaru, Paallaru, Neyarru and Thenpennai in detail and a slight touch up on the rivers Amaravathi and Bavani.

This is really a very good article which will create an awareness to the people. All the water bodies are contaminated and once it is contaminated it can never be purified.

Man has destroyed the beauty of the nature.

Continue posting such articles and you have taken great efforts in gathering the points and collecting the photos.