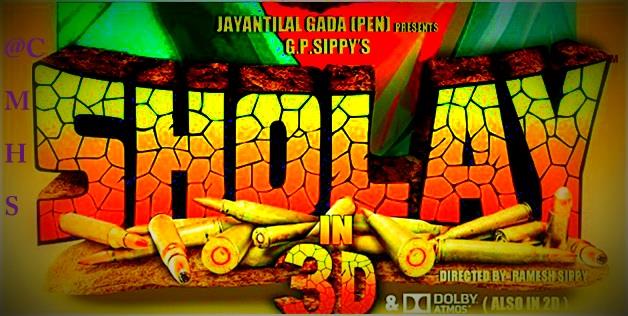 But still the 3D experience entertains and heightens the joy and thrill of the action sequences in movie. In 3D you feel the bullet almost hitting you in your face when Sanjeev Kumar (Thakur) shoots a bullet at the handcuff that binds Jai (Amitabh Bachchan) and Veeru (Dharmendra).

The Holi fight sequence and the chase sequence of Basanti's tonga by the bandits makes joyful to watch in 3D. Watching Gabbar in a 3D avatar is amazingly delightful. His wickedness, the swinging of his belt, suddenly shooting Kaaliya, his expressions…everything enhances by leaps and bounds.
Critics feel that this film was very much better in its original format than its 3D version. Though it has sharp and clear color correction, the added dimensions does not add any significant value in watching an iconic experience of Hindi cinema.

Along with the release of Indian blockbuster film Sholay there were many news about its copyright and a case was also run against Ramesh Sippy's nephew Shaan Uttamsingh and others but a division bench of the Bombay High Court has dismissed an appeal filed by Ramesh Sippy claiming to be the owner of the copyright. He claimed his nephew Shaan Uttamsingh and others were guilty of infringement of his copyright by trying to make a 3D version of Sholay.

Famous musician R.D.Burman composed the songs of the film Sholay. The effect of 3D is felt only sometimes in whole movie like when bullets, other missiles flew to the audience.But all these not gives the immense last natural panoramic impression.

This film collects gross amount of 6 crore in just three days after its release. So go to film to feel Sholay 3D.