Climate Change and its impact on India

Due to the climate change, we are on the way to the destruction of every species on earth; if we don't pay attention it was very difficult to survive in the 4˚ C warmer world.

The climate considered as the general or average weather conditions of a certain region, including temperature, rainfall, and wind. The climate system is very complex and interactive system which consists of the atmosphere, land surface, snow and ice, oceans and other bodies of water, and living things. Human activities were changing this usual scenario of this climate. Hence the drastic changes in the climate were observed especially action which relates to the depletion of the ozone layer.

The Indian economy is considered as one of the fastest growing major economies. However, the country is inundated by the various climatic disasters that continue to damage Indian economy. India shows a wide diversity of temperatures i.e from the freezing cold winters in the Himalayas to the extreme heat of Desert. The above two regions play a very significant role in controlling the weather of India eventually climate change and Monsoon. The monsoon rigorousness has increased in the last few decades due to the process of global warming which leads to the terrible floods in India. With some statistics, In India 27 out of 35 states is being disaster prone and most of the disasters are water related. India's economy experience to the impacts of extreme climate change was recently showed by cyclone Phailin. The report shows devastation of $4.15 billion caused to agriculture and power sectors alone in the state of Odisha by this storm.

Global warming in India led to an increase in frequency and intensity of these climatic disasters. The projected increase in precipitation, the melting of glaciers and expanding seas are influencing the Indian climate with increasing in incidence of floods, hurricanes, and storms. Climate change possesses a big threat to the foods security situation in India because of severe droughts and ravaging floods swamp the arable land. Melting of the Himalayan glaciers in India and reducing water flow in the rivers Ganges, Brahmaputra, Yamuna affects lots of farmers which depend on them for their livelihoods.

According to the The Indira Gandhi Institute of Development Research, temperature increase of 2 ° C in India is projected to displace seven million people, with a submersion of the major cities of India like Mumbai and Chennai.

Council of Scientific and Industrial Research (CSIR), Government of India, National Institute of Oceanography (NIO), researched on the impacts of climate change on sea level and concluded that there will be increased occurrence of cyclones in the Bay of Bengal, particularly in the post-monsoon period, along with increased maximum wind speeds and also there is increase threat to eastern coast of India and to Bangladesh.

The Risk consultancy firm Mapelcroft gives high rank to Mumbai in their annual Climate Change Vulnerability Index due to the extreme physical and economic risk because of changes in climactic conditions. Moreover, Mumbai has proximity to the coast and the surrounding hilly terrain. Indian Institute of Tropical Meteorology scientist suggested local pollution generated is usually brush away by wind blowing. But particularly in case of Mumbai, city is surrounded by hilly terrains and numerous mountain ranges that lock this polluted air within city. Moreover, extreme humidity holds particulate matter for a longer time. Mumbai is highly vulnerable to the climate change devastating as the hazard came in 2005 in the form of flooding. Moreover, Mumbai is vulnerable to the sea level rising, coastal flooding, sea acidification and different health risks like malaria. 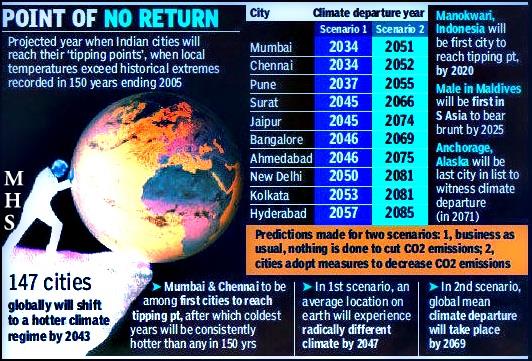 Most of the industries were located nearby Mumbai. Hence, green house effect will give horrible effects to Mumbai peoples and its nature. University of Hawaii scientist Ryan Longman and his co-workers recently published a research paper in Nature journal predicting the climate tipping point of various cities around the globe. They warned that after 20 years from now Mumbai and Chennai could witnessing temperatures hotter than the two cities have experienced in 150 years.

There are two scenarios by which two cities undergone through 'point of no return'. First scenario is no special efforts make to cut the emission and a second scenario is a special effort were made/ implemented to cut the emissions. Moreover, these predictions were come from an analysis of 39 climate models developed autonomously by 21 climate centers in 12 different countries.

In India, National Disaster Management Authority (NDMA) is the head body for addressing the disaster related policy issues and for laying guidelines to mitigate floods and other climatic disasters. Community based disaster preparedness (CBDP) is an initiative taken by government of India at local level where local people as well as the NGOs helps people by preparing them for different climatic disasters by mobilizing them easily, and helping in providing to the affected community. Other tasks of this committee include the preparation of seasonal calendars to predict the climatic disasters, mapping the risks faced by the community and taking actions to prevent them.

The NAPCC laid down principles on June 2008, approaches and institutional arrangements for managing the climate change agenda through eight national missions:
1)Protecting the poor and vulnerable sections of society through an inclusive and sustainable development , sensitive to climate change.
2)National growth objectives through a qualitative change in direction
3)Efficient and cost- strategies for end-use demand side management.
4)Deploying appropriate technologies for adaptation & mitigation
5)Engineering new forms of market, regulatory and voluntary mechanisms to promote sustainable development.
6)Creating unique linkages, including with civil society and local government institutions and through public-private-partnership.
7)Welcoming international cooperation for research, development, sharing and transfer of technologies, global IPR regime.

To cope up with the climate change-disasters-security nexus, the country needs to have a better technical understanding, capacity building, networking and expansive consultation processes spanning every section of the society. India has a distinctive vulnerability profile as the poor are the most affected.