.
Kanchipuram, Kanchi, Kancheepuram is a temple city which is situated near Chennai district. In ancient times it was called as kanchi and Kanchiampathi
The kanchi is situated over the banks of Palar River, and it is known for its temples and especially for its silk Still there are around 126 temples in kanchi and few more remain in its outskirts. This city was considered to be the capital of chollas and pallavas during their ruling periods.Kanchipuram is also called as city of 1000 temples.

Today apart from its famous temples, Kanchipuram also known for its Silk Sarees and for its hand loom industries. It is known as the Silk Citysince the profession of the people who are living there are weaving of silks . The silk is also known for its fineness and finishing. 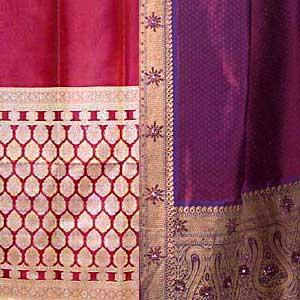 The temples in kanchipuram tell us about the glorious heritage of the kanchipuram district and are antique to be maintained which were built several centuries ago by the rulers.

Sri Ekambareswara Temple is one of the most famous shiva temple in kanchipuram. The temple is built upon a area of 20 acres and the gopura of the temple is about 58.5m high. It is one of the five major shiva temples pancha Bootha Sthalamswhich is representing the element earth. The other four major temples are Thiruvanaikaval Jambukeswara (water), Chidambaram Natarajar (ether), Thiruvannamalai Arunachaleswara (fire) and Kalahasti Nathar (wind). 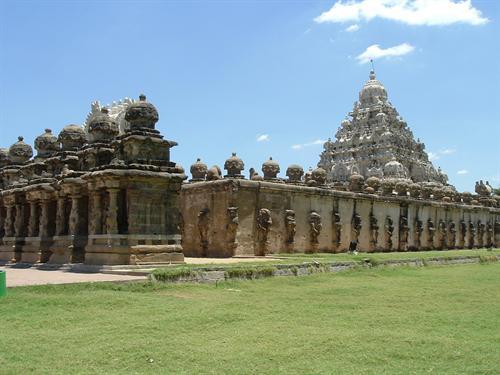 Kailasanathar temple was built by the great ruler Rajasimha of pallava dynasity. It is considered to be the most beautiful temple in the entire city which is built on LimestoneThe walls are filled with great carvings of pallva art, which are Urdhva Thandava danceof shiva and pose of parvathi laughing which is a great sight to see. 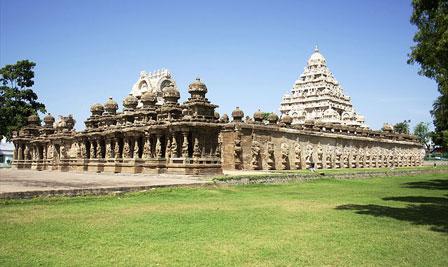 Varadharaja Perumal Templeis one of the famous hindu temple in kanchipuram whish is dedicated to Lord Vishnu. It is considered to be one of the Divya Desams .Which is situated in the top of Hastigiri or Elephant Hill . The temple is built across an area of 23 acres.

Kamakshiamman Temple is one of the famous hindu temple in kanchipuram. This temple is dedicated to Kamakshi , one of the form of goddessm Parvathi. And this temple is associated with the hindu guru Sankaracharaya . The main deity is seaten in a Padmasana , a yogic posture. Kamakshi is also known as Parasakti where she is saraswathi , lakshmib and parvati as her eyes. Ther were lots of champaka Trees around the temple and now known as Gayatri Mandapam.

Ulaganadar temple is a small temple which is located near kamakshi amman temple .The main deity of this temple is 35 feet and 24 feet wide posing with one leg in earth ans other in the sky and this pose is called as Trivikrama. This temple is one of the 108 divya desam's of lord Vishnu. The subshrines of this temple are Tiruneerakam, Tirukarakam, and Kaarvaanam are also the divya desam's. There are 5 temples located in the temple of Sri Ulaganadar, whish are as follows 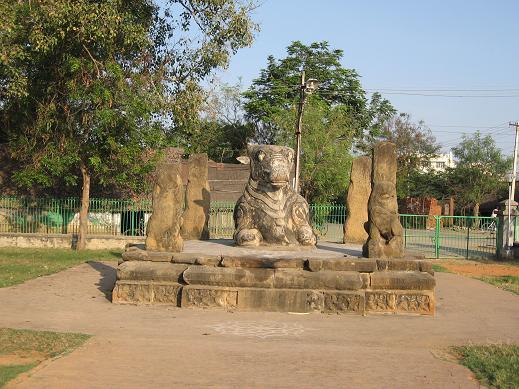 Vaikunda Perumal Temple is known for its art and architecture. The goddess of this temple is Sri Vaikundavalli Thayar where she resembles in a sitting pose. This famous temple is built by the great palla ruler Nandivarman .This temple gains a great importance during Vaikunda Ekadasi

Kacchapeshwara Temple was built during the period of pallava dynasty.
The main importance of this temple is that , in this temple Lord shiva appears being worshipped by Lord Vishnu in the form of turtle.
The deity of this temple is Kachappa Eawarar.

Vijayaraghava Perumal Temple is one of the 108 Divya Desams of lord Vishnu. Here in this temple lord rams is said to have performed the final funeral rites for the brave valliant bird , Jatayu which bravely fought aginst ravana to prevent seetha from him , where seetha is getting abducted from India to lanka. The main deity of this temple is Sri Vijayaraghava Perumal and maragathavalli

This page lists few of the famous temples available in Chennai

The temple for all the 8 Lakshmis in one place is in Besant Nagar, Chennai. Those who go to the Elliots (Bessi Beach), will not miss to go to this temple.

Kapaleeswar Temple is one of the ancient temples in Chennai. Built in the 8th century by Pallavan architecture shows the style of Dravidians.

The Ayyappan temple at Chennai is built with the Kerala style of architecture and resembles the Ayyappa temple at Sabarimala in Kerala.

This is really a very nice article from you about the kanchipuram temple town near chennai. Keep on contributing article like this.