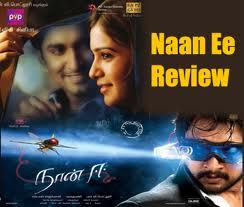 The film Naan Ee is creating a great expectation amongst the people all over India especially in Chennai. Director Rajamouli has already given a greatest hit of the year in 2011.The movie was called as "Mahadheera" unless to say. Even before the movie Mahadheera was washed away from the hearts of people, another movie which is heart throbbing has been just released. The movie Naan Ee was hosted with the young hero Nani, a heart throbbing heroine Samantha and Sundheep. The movie has been expected to be the greatest hit of the block buster in the year 2012.Both the hero and the heroine of this movie has been already in the list of cute actors. Nani's first movie in Tamil was Veppam which was a musical block buster with Nithya Menon. Samantha's movies were Vinnai Thandi Varuvaya, Moscowin Caviri needless to say were the greatest musical hits. This movie Naan Ee has a decent and cute couple in its movie. This movie is expected to be released in multi languages.

The movie Naan Ee is all about a hero who takes revenge on a villain in his next birth in the form of a house fly called Ee in Tamil. The hero of this movie is Nani and the character name is also Nani Villain name is Sudheep which is his original Name. Heroine is Samantha and the character name is Bindhu. The story goes this way. Hero Nani is madly in love with Bindhu who is a social worker and a miniature. The heroine secretly loves the hero but does not open up the love with the hero Nani. Bindhu is a simple and cute girl in this movie. The villain who is a multi millionaire business man in this movie always wanted to earn in a wrong and illegal way which is simple. Sudheep had a weakness on women and business deals. When Sudheep comes to know that Bindhu is in love with Nani. The villain tries hard and kills Nani, hero of the movie. The girl, Bindhu would be heartbroken on the death of Nani. Nani takes his next birth in the form of a house fly and takes revenge on the villain Sudheep. 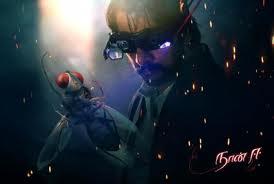 The movie has its special visual effects mostly for the most important housefly "Ee". It is needless to say that the director already shooted the movie with the budget of 40 crores of which 4 crores was used only for its visual effects. The Ee plays a major role in the movie because once it was a hero and still in its next birth. The directors Rajamouli has decided and release this movie in Telugu with the same actors. Director Rajamouli is not new for his visual effects in his movies. People have already applauded him for his greatest hit Mahadheera and are eagerly welcoming Naan Ee. Naan Ee is the movie of the mixture if love, humor and sentiment. The movie takes off in a very beautiful way in its visual effects. The movie is more of a tit for a tat. The movie Naan Ee would be the newest taste of the Tamil industry taking its different look in the Tamil cinema.

About the Star casting of Tamil Movie Naan Ee

Starting with the villain of this movie Sudheep. Sudheep basically is a kannada actor. He is not only an actor but also a great director. His actions in his movie without even knowing to speak Tamil perfectly, he has acted in a perfect way in the movie. This movie is definitely going to take him to great heights in his life. This movie would be one of his best movies of his life. It is also going to be the milestone for the villain Sudheep. Hero who is Ee in this movie and villain Sudheep played a Tom & Jerry character in this movie. There is lot of fight action of the villain with the Ee in this movie. Must mention about the comedian in this movie Santhanam. Though he appears in few of the scenes in the movie. He takes off the comedy part of the movie. The Director was very brilliant in choosing up his crew for Naan Ee.This movie Naan Ee is really going to be a big block buster in the tamil cinema.