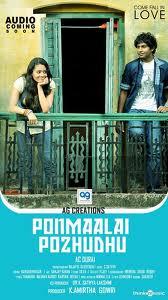 The Movie Pon Maalai Pozhudu is casted with Kishore, Lakshmi, Dass, Suresh, Aadhav Kannadhasan, Gayathri. The movie is expected to bring a great youth followings for this movie. This movie is directed by AC Durai and the Music direction of this movie Pon Maalai Pozudhu is done by C Sathya who was the great musical legend of the movie Engeyum Eppodhum. Sathya has already given hit songs of the year. He is expected to double his talent in this movie. The movie is produced by Amirtha Gowri. Aadhav and Gayathri plays the hero and heroine role in the movie Pon maalai Pozhudu.

The music of this movie 'Pon Maalai Pozudu' was recently launched by Ulaganayagan Dr.Kamal Haasan and the great lyricist Vairamuthu. It is noted to be the very first movie of the great lyricist Kannadasan's grandson called as Aadhav as the hero of this youthful movie. The Director of this movie is also a new comer to the cine industry and the movie is expected to have its own flavors and colors of its own. The heroine of Pon Maalai Pozudu movie Gayathri is also a debut to this movie and the director has projected her very well in this movie.

1. Adikkadi:
The Lyricist of this song Adikkadi is Karthik Netha. The singers of this song are the great singer Hariharan, Priya Himesh and Sathyan. This song comes up with nice beats and youthful voice of Singer or the musical legend Hariharan, This song is expected to be one of the hit songs of the year in the Tamil cine industry. This song Adikkadi is sure to beat correct chord amongst the Tamil youth. The guitar and saxophone instrumentals increased the great pep to the song along with tapping beats.

2. Masala chicks:
This song is sung by the singer NS Ramya. The lyricist of this song is Madhan Karki. Madhan Karki is the son of the great legend Vairamuthu. This song is expected to come up with the beautiful lyrics in this movie. The lyrics 'Masala chicks' is a new word to be included in the vocabulary in the terms of super figure or the hot chicks. The Lyrics though written by Madhan Karki, this lyrics is so trendy and fashionable. The simple and sweet instrument Veena used in this song is the great plus and added value to this song. The simple instrument is used heavily in this song. 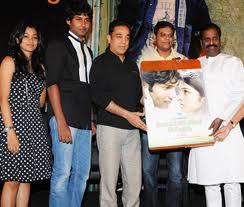 4. Vaarkothumai Kallodu:
This song is sung by many singers since it a club song. The singers are Blaze, Krishna Iyer,Philips. Since this song is the club song the song ends with the chaotic ending. The song though shot like a club song, it has Tamil lyrics which adds surprise to the song. The lyricist Karky had took a keen important to put down his thoughts in this song since it is an unusual song. The Composer Sathya has really put this firth in a different way. This song is expected to be with the enthusiasm amongst the youth. This song has also includes many instruments with the freestyle singing.

5. Iravugalil:
This Song is sure to have the great fan followings for its lyrics and the melodious composing. This song is sung by the one of the most favorite singers of the Tamil Singer Karthik. The lyrics is written by the great lyricist Thamarai. This song composing is very brilliant and the singer Karthik's voice added value to this song. The composer Sathya had taken a special place to compose this song. The hero feels it as the great opportunity to have shot with the great singer's voice in this debut movie of him.

About The Music Composer:

The Musical composer of this movie is C Sathya. Pon Maalai Pozudu is said to be the second movie in the Tamil industry composed by Sathya. The music composer is very much influenced by the music director Harish Jay raj and the songs has the flavor of Harish Jay raj in this movie. Sathya has already given the greatest hits of the year and he is also expected to do the same in the movie Pon maalai Pozudu.
PS: This Movie is expected to be released in the month of August 2012.