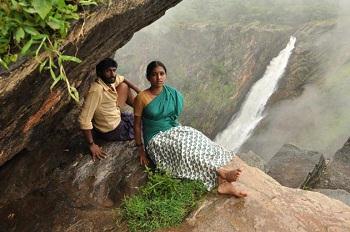 Kumki, a recent Tamil movie produced by N.Lingusamy and N.Subash Chandra Bose of Thirupathi Brothers and directed by Prabhu Solomon. The credit of story and screen play also goes to Prabhu Solomon. Vikram Prabhu (as Bomma) and Lakshmi Menon (as Alli) are the main stars of the film. The other characters are elephant (as Manikam) Thambi Ramaiah (as mama for Vikram Prabhu) and Asvin Raja (as undiyal) .The story is based on the life of a manhout, which is the role done by Vikram Prabhu and a village Aadhi Kaadu. D.Imman has given us pleased melodious music. Cinematography is done by Sukumar. The location chosen are forests of Kerala and Karnataka. Certain scenes were shot at Jog falls in Karnataka. The movie explains a very good story line that happened in a tribal village. The team has done a wonderful contribution to the movie in terms of acting. The elephant in the movie has also given a very good performance.

The movie completely revolves around saving a tribal village named Aadhi Kaadu from a wild elephant named Komban in this movie. The tribal village is depicted as having their own tradition and culture. In honour to their ancestors they do not wish to dessert their region and be safe from Komban. So they decide to bring an elephant that is trained to fight against the wild elephant. Bomma accepts to take his dearest small elephant, Manikkam in replacement for a real trained elephant. After seeing Alli he decides to stay in the village. He tries to train his elephant but it remains a waste effort. Alli who initially rejects Bomma, slowly accepts him. One fine day when everything seems to be normal Komban attacks the tree house where Bomma, his mama and undiyal live. Bomma is being attacked by the wild elephant and so Manikkam becomes furious out of the love it had for Bomma. Whether Manikkam wins the fight or not is the climax of the story. 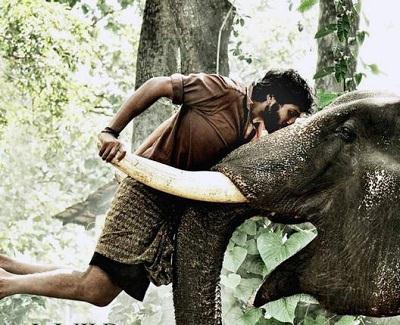 The introduction clearly portrays the affection that Manikkam and Bomma have for each other. Thami Ramaiah uses perfect timing dialogues that make us laugh here and there. The villagers respect for Thambi Ramaiah and the way he gets scared for the fraudulent act they are performing are the best throughout. The director carefully and slowly takes us to the village and just as we feel indulged into the film the track changes causing heavy hearted feelings. The film is a must for nature lovers. The location being in and around Kerala has proved its point. The pleasing sights of the hill and forest remind us about Prabhu Solomon's Hit film Mynaa.

Kumki is perfectly directed and the track of the film moves in an exactly required pace, not too fast and not too slow. The BGM plays a superb role in blending the movie with the location and the story. Though there are a few confusions of whether love for a girl can make a man to take risk with the life of his only lovable creature and later they depart for the reason that Alli's father has great trust in Bomma, the film as such has proved a wonderful entertainer and ofcourse a feast for the eyes with all the greenery around. The innocence of Alli and the way she initially fears for elephants and then is friends with Manikkam are given beautifully. The love scenes are given just the enough mix of romance and affection. Nothing more or nothing less would have made the film perfect. Over all there is perfectly no over acting and all of them have performed just what is required.

D.Imman, the music director of the film has done perfect justice with the songs. Songs which depict the first moments of love that strikes the hero, the song which comes for the celebration of harvest fulfil exactly their purpose. The song, Sollitale remains a wonderful hit from the day of song release. On the whole the songs seem to have the same tone and texture, but very pleasing to hear. The cinematography of the songs is also done beautifully. The music of the song directly takes us to that beautiful location.

Although the story seems to be very familiar and usual the direction, screenplay and the location has made the film a super hit. On the whole Kumki is a superb entertainer and feast for the eyes. Prabhu Solomon takes us deep into the film, which makes us return home with heavy heart after the climax. Reality and casualty have brought success to the team. The movie has created impact on the director. Hope he takes us to another wonderful hill top soon. Hats off to the team for such a beautiful effort given for the movie.