Akshardham temple, Gandhinagar-Gujarat is one of the greatest temples in India which is a symbol of cultural and holistic status of India and Gujarat. Akshardham temple, Gandhinagar is one of the largest among the temples built by Bochasanwasi Akshar Purushottam Swaminarayan Sanstha (BAPS). This temple is blessed and guided by Spiritual leader of BAPS Pramukh Swami Maharaj.
Akshardham temple, Gandhinagar was built in 1992 which is dedicated to Lord Swaminarayan who took birth in India (Chappaiya Village, UP) in 1781-1830 to serve and guide people of India along with formation of Swaminarayan religion. This temple is living example of combination of cultural, social, religious, education, devotional place. The security system of the temple is now more alert than September, 2002 as This temple was attached by two terrorists in 2002 which is one of the horrible event in Indian Cultural history that even Temples are not safe nowadays due to this type of anti human activities called Terrorism.

Akshardham temple, Gandhinagar is made up of 6000 tonnes pink sandstones to give amazing and wonderful image to this temple. This temple is made up of different 93 carved pillars which show storylines of life of Lord Swaminarayan and religion, 40 windows and this temple was built by 900 skilled men with enormous amount of building time of more than 1 crore 20 lacs hours.

Exhibition hall no. 1 and no. 2 is called 'Neelkanth Hall' and 'Sahajanand Hall' where life of Lord Swaminarayan is showed in theatre specially built for this show. The show drew you back in time when Lord Swaminarayan was alive in Chappaiya Village-Birth place of him. The show also include 'Journey through India' and 'Sound-n-light' shows which finely portraits Lord Swaminarayan's life. IMAX like show is shown by film called Mystic India which is first in large format epic in Indian history. The film is owned and financed by BAPS sanstha. The show is of about 1 hour duration. The floor area of this hall is about 22000 square feet. 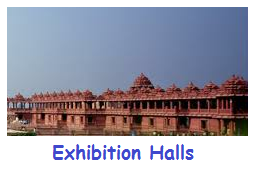 This hall is called 'Nityanand Hall' which shows message of Mahabharat, Upanishads and Ramayan though film. This also includes exhibition containing combined audio and animation show (45 minutes) which recreates events occurred in past. Floor area of this hall is about 9420 square feet.

Premand Hall which is of also one hour duration shows journey from Hastinapur from the mahabharat, songs of saints and Gurukul nature. Floor area is about 31000 square feet.

Sant Param Hitkari hall shows audio animation film which carry you to the journey beyond 200 years and gives you feel of life in those time which is of amazing atmosphere, events and happenings during those days.

Sat-Chit-Anand Water show
The Sat-Chit-Anand water show runs about 45 minutes which tells the story of Nachiketa who fought with Yama-God of Death to know supreme knowledge about humanity. Story is referred from Kathopanishad. This show is shown normally after sunset to have proper viewing of colors shown during water show. The show is possible by use of around 4000 nozzles, 100 pumps and 12 fireball throwers.

How to reach at Akshardham Temple

Akshardham Temple is located in Gandhinagar which is about 30-35 km away from Ahmedabad by road. The nearest air port is Sardar Vallabhbhai Air port, Ahmedabad which is at 13 km from temple. By rail, Ahmedabad Junction/Kalupur is nearest big railway station where majority of trains stop is available from each region of India.