Dwarka, Suvarna Dwarka which is also known as Dwarawati as ancient name found in Sanskrit literature like Vishnupuran, Mahabharata, Bhagvata Purana and Skanda Purana. Dwarka is a city and also a municipality under district of Jamnagar. As per Olden days, there are seven most old/ancient/religious cities in our Bharat and they are namely Mathura, Ayodhya, Kashi, Kanchi, Avantika, Dwarka and Maya. 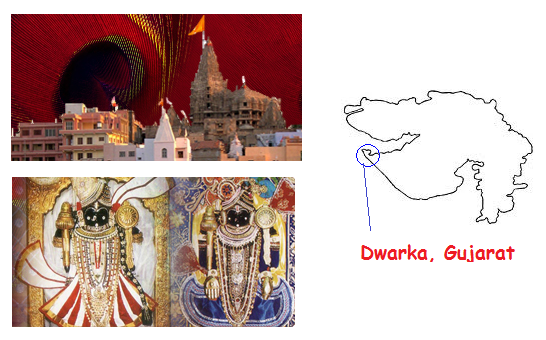 Dwarkadish temple/Jagat mandir is situated in Dwarka city. The present temple was built by grandson (King Vajranabha) of Lord Krishan in about 2500 years ago. The old Dwarka city was built near by the modern day Dwarka city but it was unfortunately sunk in Arabian Sea six times. After Lord Krishna left the Dwarka to go to Vaikunth and that time was about 36 years after War of Mahabharata (3138 BC). Whole Yadav kul was destroyed due to quarrel between own brothers. Arjuna was sent to Dwarka to save grandsons of Lord Krishna and their wives and to bring them to Hastinapur. As Arjuna left the Dwarka, whole Dwarka was sunk into the sea and thus complete demolishing of great Yadvas happened.

Modern Dwarkadhish temple is 5 stories temple built by sand and limestones only. The present temple has two dwars (Gateways) namely Swarga Dwar and Moksha Dwar. Entry to the temple is via Swarga Dwar and exit from the temple is via Moksha Dwar. Visitor can see the confluence of river Gomti into the Arabian Sea from the temple. One can also visit the shrines/holy places of Devaki, Vasudeva, Balarama, Revati, Rukmani Devi, Subhadra Devi, Jambavati Devi. Temple of Devi Rukmani is situated on the way to Bet Dwarka temple. One has to use Boat to get there and one can get the holy darshan of shrines of Lord Lakshmi narayana, Trivikrama, Rukamani Devi, Devi Satyabhama and Devi Jambavati. The modern temple has many carvings rich with ancient events and stories, messages. This five storied modern temple rests on 60 pillars and its shikhar is of about 170 feet height. Temple has 52 yards lengths of cloth flag and it is also seen from a distance 10 km away from it.
Visiting time of Temple: 6.30 am to 1.00 pm and 5 pm to 9.30 pm daily

As per the order of Lord Krishna, Vishwakarma built the first olden Dwarka city and land for city was acquired from the region of Saurashtra sea shores as first city was built on the water and it was like an island. This city was also known as Dwaramati, Kushshthali and Dwaravati. Holy Gomti River passed nearby the old city and present day it also passes by and submerges into the Arabian Sea. 'Sudharma Sabha' hall was also built in that time to have holy meetings; complete city was planned as per wish of Lord Krishna and has many palaces, roads, plazas and public utilities. Each wife of Lord Krishna had her own palace made up of God/silver. There were almost 7 lac palaces for such purpose.

Bet Dwarka is like an island and visitor can go there worship Lord Krishna by means of boat from Okha Bandar. There are many temples on Bet Dwarka related to Lord Krishna and Devi Rukamani. It is believed that Lord Krishna's home was at Bet Dwarka and it was sunk when Lord Krishna left it when he went to Vaikunth.

Where to stay at Dwarka?

Visitor to Dwarkadhish temple can have stay in nearby Hotels, Atithi gruhs, Circuit house. Few stays are as under

How to reach at Dwarka