In last 2 decades the energy scenario globally has undergone drastic change, due to growing more and more demands and shortage of supply. The source of energy is fossil fuel like coal, natural gas and oils. Its cost is increasing drastically due to increase in consumption and shortage of supply. This era is coming to an end. Due to large consumption of fossil fuel resulting in environmental pollution, global warming and ozone layer depletion. Now the conservation of energy and search for renewable sources of energy which are environment friendly is the main attention globally.

In Gujarat a group of solar park is built which is named as Gujarat Solar Park. On completion of the project will generate electricity of 1000 megawatts (MW). This result in saving of huge environmental pollution and fossils fuels.

One of the largest in Gujarat Solar Park is Charanka Solar Park project in Patan district is cover 4900 acre area with a large group of 17 thin film photovoltaic power system. This project will generate 600 MW of electricity will save 8000000 tonnes of carbon dioxide release in earth atmosphere and around 900000 tones of fossile fules per year.

In 2013 it is expected to build 1000 MW of project by 84 developers. This results in huge saving of non-renewable source of energy and environment pollution.

A solar cooker is a device which cook food with using only solar energy which is available free of cost and renewable source of energy, so no dependencies on fossil fuels like Kerosene, Wood, Coal or Gas. Only disadvantage is it will not work during cloudy days. It can cook meal for 5 person. 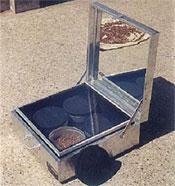 It has same functionality as solar cooker. The Solar Steam Cooking systems developed for group cooking in kitchen like hostel, halls, hotels etc. 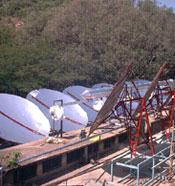 Dish Solar Cooker is used for more number of people than Box Solar Cooker and used for faster cooking. It can cook meal for around 15 person. Diameter of Disk is 1.4 meter made by joining pieces of reflector. 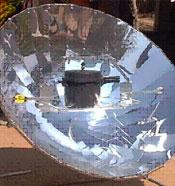 Evacuated Tube collector is made up of borosilicate tube to provide insulation. Inner part has absorber material and in turn transfer heat to flowing water through inner tubes.