Family and personal life of Samantha

Samantha's father is a Telugu man while her mother hails from Kerala and is a Malayali. From her childhood Samantha is brought up in Tamilnadu and feels comfortable speaking Tamil. Besides graduating in commerce from Stella Maris college in Chennai, she pursued her career in modelling and entered the field in her late teens. She is 5'6" tall and presently her place of residence is Hyderabad in Andhra Pradesh. 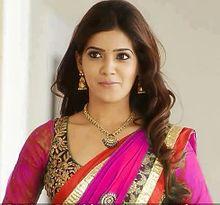 Image Courtesy: Wikipedia
Though Samantha has started her cine career by signing for few Tamil movies in mid 2007 like Ravi Varman's Moscowin Kaveri yet her debut release was Gautham Menon's Telugu movie Ye Maaya Chesave which was released in February 2010. In this movie she acted opposite Naga Chaitanya and got a positive response of her performance in the movie. Some of her good numbers in the Tollywood which added up to her film career are:

Samantha even took to modelling and appeared in some ads like Chennai Silks, Coca Cola, Chik Shampoo and others.