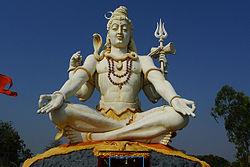 
All Hindu Gods has two eyes except Lord Shiva. The Lord Shiva is called as Trayambaka Deva for having the third eye. In the two main eyes of the Lord Shiva, the right side eye is named as Sun and the left side eye is named as Moon. These two eyes are used for the continuation of universe, hence these eyes emits less power so as to meet the universal requirements. The third eye of Lord Shiva situated at the cent-re of forehead known as the symbol of spiritual power and eye of the wisdom. The third eye contains much more energy in compare with other two eyes and on opening the third eye the entire universe will get destructed. Whenever the sins, immoralities and devil powers overtakes the good and truth then Lord Shiva opens the third eye for destroying everything in the universe and builds a new universe.

Lord Shiva is the most prayed God among Hindu devotees. Lord Shiva has lots of pilgrimage places in various parts of the India and world. People even construct new temples for Lord Shiva and offers prayers.