Kalbelia people from Rajasthan are a nomadic tribe who excel in catching snakes and performing various dances and performances based on these snakes, especially the Indian cobra. Kalbelia dance is the indigenous and one of the most sensuous dance form of these Kalbelia people where the dance form imitate the movements of the cobra. 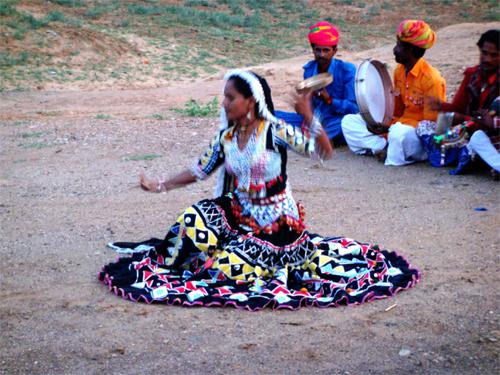 The Kalbelia Dance of Rajasthan

The Kalbelia dance is usually performed by the womenfolk of the Kalbelia tribe. It is performed to celebrate any festival or joyful event in their day to day lives. The Kalbelia dance is performed in a very sensuous way and is quite famous all over India and many Bollywood movies have takes steps from this dance form. The men folk play the musical instruments and the percussions. The main instrument associated with the Kalbelia dance is the 'Been'- a wind based instrument which the snake charmers usually play. Also many other instruments like the Dufli, Morchang, Dholak etc. are used while performing this dance.
The Kalbelia dancers wear long black skirts which may be embroidered with many decorations and ribbons. The women usually 4-5 in numbers spin their bodies to the sound of the music and percussions. They usually gyrate their bodies emitting the various actions of a cobra and increase their speed with the increase in the tempo of the percussions.

The dance usually lasts for 5-10 minutes after which another dance session may start. Women like to showcase their flexibility and skills by performing this dance.