Indian archer Jayanta Talukdar from Assam will be representing India at the archery events of 2012 Summer Olympics in London, UK. Basically he is from Guwahati, Assam. He is considered to be the third sportsperson from Assam to receive the Arjuna award. Others were Bhogeswar Baruah (1966) and Monalisa Barua Mehta (1987).Archery is considered to be an ancient game in India. Some of the popular faces in Indian archery were Limba Ram, Satyadev Ram, Dola Banerjee and many more. This was the past connected with archery in India. Now we have youngsters trying their best in archery. From this Jayanta Talukdar wiki biodata, you will be able to get more information regarding him. 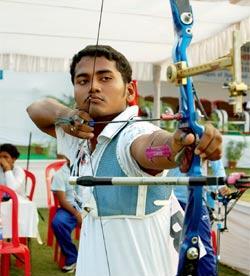 Jayanta Talukdar is considered to be a promising and future player of archery in India. Born as the youngest son of a quarry owner in Assam, he was not even aware of the sport until archery selectors spotted him in a talent hunt trial held in Guwahati. After getting training from the Tata Archery Academy Jamshedpur, he found a place in the Junior National Archery Team of India. India Government honored Jayanta Talukdar with Arjuna award for his excellent performance in archery. Given below is the archery career of Jayanta Talukdar at a glance.