Kangna ranaut in her sister's wedding 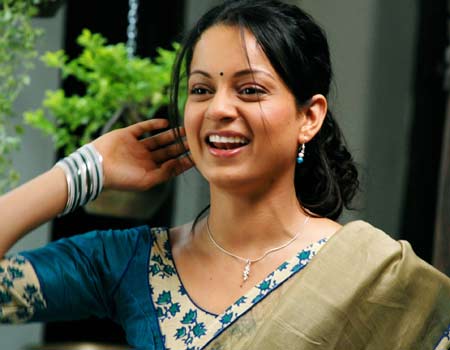 The popular Himachali Girl Kangna Ranaut attended her sister's marriage in Mandi district of Himachal Pradesh. Kangna's sister got married on wednesday in Mandi. Kangna was so happy that she find time from her busy schedule to attend marriage of her sister. She was also looking very happy. She came 2 days ago and had done shopping for her sister's marriage.

Activities performed by Kangna in her sister's marriage

Kangna performed on many hit rock songs of her films like- her famous song from movie Tanu weds Manu song Kadi Saddi Gali Bhul Ke Bhi Aaya Karo. She got emotional at the end but during the whole marriage she was in a enjoying mode and keep performing during whole of the marriage. Kangana's father confirmed her presence in her sister's wife.

Now a days Kangna is busy in shooting of her next movie with Sunny Deol. She is also doing some ads and some other movies.

The economy of the Una district is agriculture based, most of the land have the irrigation resource while rest is depends fully on rain water. There is mixed Pahari and Punjabi culture & traditions while languages being spoken are Pahari, Hindi and Punjabi.

here are the names of some popular himachalis, who have accumulated a great fame among all

Newly opened branch of State Bank of Patiala in Sarkaghat. The branch had been opened in December of 2010.

The Patanjali Chikitsalayas are the basically Ayurvedic Dispensaries have their own network wide world include supply of Ayurvedic Medicines.