Tamil month Aadi or Aadi Masam begins on July 17, 2013. This is the fourth month in Tamil Calendar and many of them believe that this is an inauspicious month. 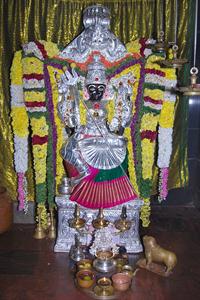 This is because they believe that the night time of Gods Dakshinayana Punyakalam begins in this month of Aadi. Though the above myth is believed some consider this as an important month because of the special Tamil rituals and festivals.

The tamil month Aadi is dedicated to the worship of the Goddess and Varalakshmi Pooja is celebrated in this month. The Aadi Amavasi is dedicated to worship the dead ancestors. They believe that poojas performed on this day will go to the ancestors and all the generations will be blessed by them.

Aadi Krithigai, Aadi 18 Peerukku and Aadi Pooram are other important festivals. All the Tuesdays and Fridays in the month are considered as auspicious and dedicated to Mother Goddess. On these days the young unmarried women and those who suffer from Naga dosham or Kalasarpa dosham go to the temples which have snake puthus and offer the snake egg and milk. They worship the snake as God. If you are interested find Tamilnadu festival recipes here.
Aadi Masam ends on August 16, 2013.

Aadi Month Calender 2012, Important festivals in the month of Aadi

Tamil New Year is the important festival in Tamil nadu. Want to know, how it is celebrated and the concepts behind its rituals. Then this resource is for you. I tried to provide information as much as possible I can. Hope this will be useful while you celebrate Tamil New Year.

This resource gives you important details about the fairs and festivals in Tamilnadu. In this resource I have given a brief desciption about each festival. You can get details about The Harvest Festival 'Pongal', Chithirai Festival at Madurai, Dance Festivals At Mamallapuram, Natyanjali Dance Festival at Chidambaram, Skanda Sashti Vizha, Karthika Peruvizha at Tiruvannamalai, The Aurbathimoovar Festival, Mahamagam Festival at Kumbakonam. Read the article and get to know about the festivals of Tamilnadu.

Give a good start to the new beginning of Tamil New year 2013 with delicious Tamil New Year Recipes like Pal Payasam, Parupu Poli, Mango pachadi, Dal Vada and Vepampoo Pachadi. Read the below article to know how to prepare these dishes with simple ingredients that can be found at home. Enjoy these tasty dishes.