One of the Oldest Temples in Tamil Nadu - Kottai Mariamman 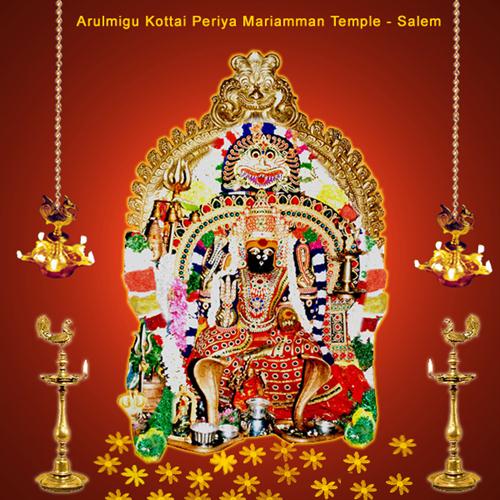 The temple Kottai Mariamman is situated in the center of the mango city Salem. It is said to be about 500 years old. It is supposed to be the eldest of the eight other goddesses in the city. As this is the eldest and the most important goddess in the cities nearby it is said as the god that protects and rules the city around Salem.

In the past about 500 years before it is said that the cheran kings came to the location and build a big wall around and place where they also build a big temple for both Shiva and Mariamman that was their prime god. But as of now the long wall that was established is not there and to show that there was a wall the name kottaimedu was kept to the city where the wall was there. Then the goddess inside the compound was transplanted to a place named Thirumani Muthaaru. There are also prayers and other offerings made to the other gods mean the prime god lord Shiva which is the special thing in this temple. Though there was both the Shiva and Mariamman temple here the Mariamman temple is the most famous one in this location as of now.

Appearance of Goddess Mariamman in the Temple

Though the goddess at this location seems to be a small girl child it is said that the goddess is very powerful and the wishes of the devotees are satisfied soon. It is one of the famous temples in Tamilnadu and there is a Tamil Movie also named after the temple's name. Small in size but big in deeds is a apt proverb that can be given to this goddess. The goddess has a shining Crown over her head that shines like a fire and it appears like a five headed snake taking its real shape. The Goddess has four hands in the right hand that is above there is a snake and a thing that plays music is available. In the left hand of the goddess a three headed weapon and one more thing called angusum would be there. The goddess would appear like a happy and a kind hearted one and instead of a head that is seen in most of the Mariamman temples this goddess would have a lotus beneath her legs. One has to say that it is the temple that has the smallest entrance to see the goddess in the holy room of the temple. There are various places like front entrance, outer entrance, and place for denoting, parrot hall and various places that includes the entrance build of the black stone.

Practices and belief's in the Kottai Mariamman temple

This temple is famous for the belief like taking two flowers of different colors and praying with them and at the end of the prayer if the person takes the right flower among the two flowers of his wish, the prayers made by him is said to be successful. In case a person is affected by chicken pox and if he comes here and gets the sacred water and throws it over him it is said that the chicken pox would leave him.

One more type of practice that takes place here is the people who pray for them make dolls and then make three rounds around the temple and then keep them in a place where it is ought to be kept. In case a person is affected by any disease like eyes, legs, hands etc., the devotees make the particular shape and keep them in temple and by doing this it is said that the disease gets rectified soon.

This is one of the most powerful gods that are worshipped in Tamil Nadu. There are many devotees that worship this temple and this goddess for years together and this created a good name among the pilgrims and so people from long distance travel over here and make prayers on special occasion.

Most of the temples in Tamilnadu are built because of some specific reason. In the same way the Great Tanjore big temple was also built with some particular plan by the great King Raja Raja Chola before 1000 years.