There are lots of Movies in Tamil that evoked the patriotic feelings in the mind of the audience. These movies focused on Patriotic feelings and got some good responses in Tamil Cinema Industry. I had prepared a list with some movies that attracted me. As the Independence day is fast approaching I would like to post this article that consists entirely of Patriotic Movies and the ratings they received from the IMDB. The Best Tamil Patriotic movies are as follows, 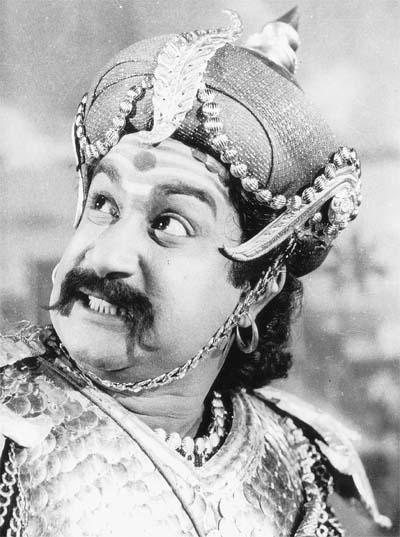 This is the movie that created a huge hype in the minds of the Indians and this movie was released in the year 1961 with 7.1 ratings out of 10 and was released just 14 years after the Independence of our country. In this the lead role is done by Sivaji Ganeshan and Gemini Ganeshan who are trying to send the Britishers out of the country and after repeated failures are send to jail and are unable to fight successfully against the Britishers. The Movie is about the famous freedom fighter Va Vu Chidambaram Pillai who is a salt factory owner in this movie. He tries to fight against the Britishers and so he never accepts the cloths of the britishers and at one stage he burns the latest shirt that he bought for his son from abroad. He tries to fight against the White men and so does his follower Gemini Ganeshan.

At one stage he tries to buy a ship by collecting money from the public and while he buys two ships with the fund and tries to connect between Thuttukudi and Colombo one more problem arises between him and this time he is not able to run the ship as the Britishers are running the ships for less price than what he is doing.Soon he is not able to pay his debts and is arrested for the same and at the end Sivaji Ganesan gets out of the prison but still seems to be unhappy as his revolt against the Britishers was not a success.

This was Another Great acting by the famous actor Sivaji Ganeshan who did the role of the famous freedom fighter in the year 1959 Veera Pandiya Kattaboman. This movie was a great creation in those days that depicted how the king from Panchalankuruchi tried to fight against the Britishers and what all he did to oppose them. In this movie the Acting of Sivaji was very impressive and especially the speech where he tries to avoid giving tax to the britishers is pretty impressive.

I think one this is one of the best performance that made him a great actor in those days. He played one of the prime kings in Indian history that avoided tax to the britishers and fought for their right. But at the end the personality was hung in the year 1799 because of the culprit Ettapan who revealed the secrets of the Kings and his kingdom that made the Britishers to pounce on the great King kattaboman.

This is the greatest movie with the ratings 6.4 that was released in the year 1973 in which the lead role was did by Sivaji Ganeshan and the female role was done by K R Vijaya. It is about a person who is doing a marketing job in a company and because of his straight forward character he loses his job and soon he meets the heroine of the movie K R Vijaya who is also involved in the marketing Business and because of the same problem both of them are send out of their companies. Soon they both become lovers and stay together in a apartment named as Bharatha Vilas where there are various other religions of people leaving in the same apartment. Though the movie did not give much importance to the patriotism this is one of the movie that gave the people how we Indians varying in our religion live together and lead our lives. I think this is the only thing that made me include this movie in this category.

The songs in the movies are really very good and especially the song "Indhiya Naadu Nam Naddu Indian enpadhu nam pearu" is the song that is sung even today in the Independence competition and the republic day functions. 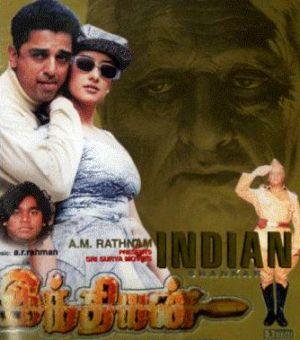 It is one of the most important movies with the ratings of 7.7 that released in the year 1996 with the Tamil actor Kamal haasan doing a Dual role one as the father and the other one as a son. The female lead is done by Manisha koiralla who is a top Hindi actress. The characters in the movie are really awesome and one cannot just say how the movie gets going. In this movie the Kamal playing the fathers role is very much affectionate to their children's and more than that he is a type of person who fought for the nation's independence and thus had more respect for his country than any other thing in the world. He also kills many people who are acting against the people in many ways and this creates a sensation.

On the other hand the kamal playing the son's role does many mischievous activities that are against the country. He works as an RTO officer who supplies license at a high rate for people without any tests and this creates lots of problems. At one stage the son issues a certificate for a bus saying that the bus is fine by accepting some bribe and this becomes a reason for the death of many school childrens and the father takes revenge of the activity by killing his own son. 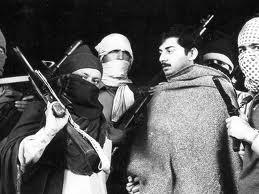 Roja is one of the famous movies With the IMDB ratings of 8.0 that were released in the year 1992. It got some critical appraisals from the Tamil Cinema industry and it was a huge hit. It featured Aravind samy in the lead role. This is about a person who is send to the Kashmir border for his official work. In this short period of time the actor is getting kidnapped by a group of terrorists and he is tortured in many ways. At the end of the movie Aravind samy is left by the terrorists and the movie ends here. The songs in these movies got a massive response and I think it is one of the well directed movies in the Tamil cinema Industry. 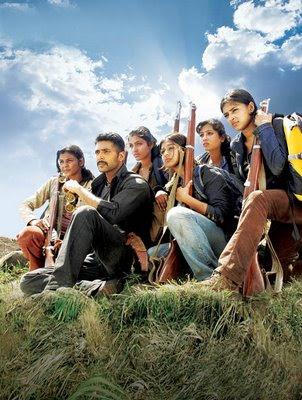 Peranmai is one of the latest flicks that earned ratings of 7.0 out of ten and got a good response in the box office and it was released in the year 2009. In this movie Jayam Ravi did the lead role with five girls who did the supportive roles. This movie is about the NCC camp that is help at a forest area. Unfortunately the foreigners enter the forest and try to destroy the satellite that is prepared to be sent by the Indian Scientists in a place called Mudhumalai.

This is one of the most enthusiastic movies where Tamil actor Jayam Ravi at the start of the movie is insulted very much by the group of five girls as he belongs to a low civilized category. Soon Ravi shows his talents when he faces the foreigners who have entered the state of Tamil Nadu for the prime motive of destruction of the satellite. The movie carries a moral that a person cannot be judged by the surroundings which he comes from and the caste of a person.

Mudalvan is the movie that was released in the year 1999 which had Arjun playing the lead role and the female lead played by Manisha Koiralla. 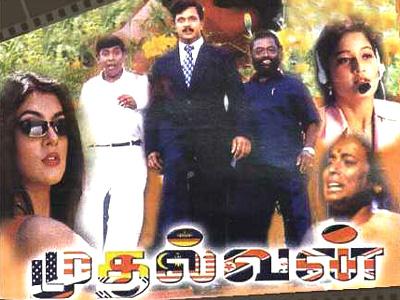 This is about a photographer who is pulled into Politics by the ruling leader Raghuvaran who does the Villains role in the movie. It all begins with the television interview where the Chief Minister is interviewed by the television cameraman Arjun. This creates some problem where the CM is forced to say Arjun to become one day CM and this gives Arjun a chance to become the CM of the state. Though Arjun neglects that in the start he them accepts the challenge and does many things in the short span of one day including the arrest of the previous CM.

After this though Arjun leaves politics and stays away from it the villain and the others who were disturbed by him start to take revenge and at the time of elections Arjun is forced by the people to stand in the elections as he did lots of good things in a span of one day. Soon Arjun becomes the politician and that too a CM and how he does the CM's work aptly is the remaining part of the story. This movie created so much awareness that there was an award named Mudhalvan Award given to the toppers of the schools after the success of the movie.