The Chennai Super Kings (CSK) is one of the best teams in Indian Premier League. The team won IPL cup in the Third season and fourth season successively. The team is formed under the captaincy of Mahendra Singh Dhoni and is coached by Stephen Fleming. Chennai Super Kings is currently the most successful team among IPL teams of all seasons. CSK has won the IPL title twice in succession (2010 and 2011) and reached the play-offs every season. Chennai Super Kings were the first Indian team to won the Champions League Twenty20.

The most fantastic team of IPL first season. Entered the finals of IPL by defeating Kings XI Punjab by 9 wickets. In the finals CSK made 163 runs for the lost of 5 wickets, but unfortunately lost to Rajasthan Royals in the last ball of the match.

In this season CSK started with a defeat by Mumbai Indians for 19 runs. The Super Kings finished with 17 points from 14 matches and got second place in the league table. But at the semi-finals, they were defeated by Royal Challengers by 6 wickets. Thus got eliminated from the IPL.

This season also, CSK starts with a lost game to Deccan chargers, the champions of previous season. CSK entered in to IPL final by defeating the Deccan chargers itself. In the final CSK elected to bat first and put a decent score 168 for 5 wickets against Mumbai Indians. Mumbai Indians got a good start but eventually lost to Chennai for 22 runs. The first championship title for Chennai Super Kings.

As CSK came in the top three positions of IPL 2010, they became eligible to play in Champions league twenty20. CSK topped in Group A with 6 points to qualify for the semi-finals where they had to face Royal Challengers Bangalore. CSK outrunned Royal Challengers by 52 runs by D/L method. In the final, Chennai Super Kings beat the Chevrolet Warriors by 8 wickets and became the first IPL team to win the Champions League. Murali Vijay won the Golden Bat for scoring the highest runs in the tournament and Ravichandran Ashwin became the leading wicket-taker and Man of the Series. 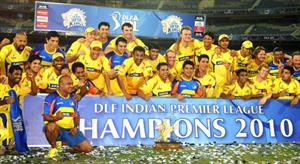 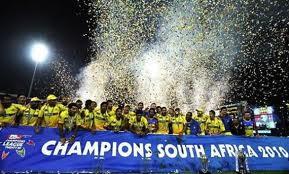 2011 season IPL:
In 2011 season, CSK was almost out of the league but the magnificent performance from Albie Morkel , 28 runs from 10 balls, helped the CSK to defeat Royal Challengers Banglore. They met the same team in final too, as per new rules of this IPL season. In final CSK made 202/5 in 20 overs and RCB lost their game to CSK by 63 runs making CSK the IPL champions for the second time successively. 2011 season ended up as Chennai's most successful season because they successfully defended the title and asserted their dominance in the league with a win percentage of 64.11, their highest in all IPL seasons. CSK also won the Fairplay Award for the third time in four years. 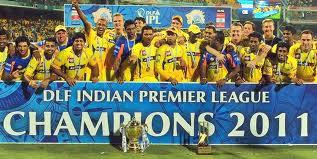 2012 season IPL:
In this season Chennai Super Kings bought Ravindra Jadeja for 2 million dollars. He is the only player CSK bought in this season. CSK has to face Kolkata Knight Riders in the final. After batting first CSK made 190/3 in 20 overs. KKR needed 16 runs from last over, CSK almost smelled their third win. But a magnificent innings from Manoj Tiwary of took away the game from Chennai, giving KKR their first IPL title.

IPL teams were given to trim their teams, but Chennai almost retained their team. They retained their 16 players of previous season and went for bowlers this time. CSK didn't bought a single batsman in this season. Instead they went for bowlers like Gurunath Meiyappan, Dirk Nannes, Ben Laughlin, Jason Holder.CSK also signed up the Indian U19 and Tamilnadu all-rounder Baba Aparajith and tamilnadu Ranji Player Vijay Shankar. Chennai Super Kings have boosted up their bowling department further by signing five Indian bowlers. These players are Uttarpradesh fast bowlers Imtiaz Ahmed and Ankit Rajpoot, Mohit Sharma from Haryana, Karnataka fast bowler Ronit More and Tamil Nadu left-arm spinner, R Karthikeyan.