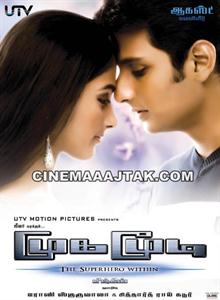 Hero of this movie is the most youthful guy of the tamil cine industry Jeeva. Heroine of this movie is Pooja Hegde. Narain also plays a major role in this movie. This most awaited movie is directed by the director Mishkin. Mishkin already has given some of the award winning movies in Tamil. The most welcomed movie was "Anjaathae". This movie has won almost eight awards. This movie was more of an action movie. The movie Mugamoodi is expected to be one of the same kinds as Anjaathae. The shooting of this movie has started at the month of September 2011. Under the production of UTV Motion Production, the movie Mugamoodi was about to commence. This movie was actually commenced in the year of 2008 and the production was discussed at that time.


The movie Mugamoodi is all about a man who is not happy about the injustice and corruption happening around him and he wanted to change that policy of injustice and corruption. Since the year of 2009, Jeeva and Narain were suggested to go for training in China for the special fights in the movie. Earlier, actor Surya was about to be in the movie as a Kung Fu as a Protagonist. The artists of this movie Jeeva and Narain and some other people were trained in the YMCA ground in Chennai. They underwent training in martial arts for more than 6 months. The costumes were designed by The National Institute of Fashion Technology, Chennai. The technologies used for the special effects were done by the Indian Institute of Madras, Chennai. 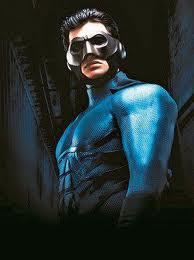 The movie was shot 70%in Chennai and remaining in the foreign countries such as China, United States, Hong Kong. The fight scenes between Jeeva and Narain were shot in Trplicane, Chennai. The special fight sequence were shot in Los Angeles. The most different movies like Yutham Sei,Chithiram Pesudhadi, and Anjaathe have already exceeded the expectations from Mishkin, so the movie Mugamoodi is short in different locations to add more difference to the story Mugamoodi. Mishkin has shot the movies in the locations which is very new and different to the Tamil cine industry. The songs of this movie Mugamoodi was shot in the unique places of Hong Kong.

The other working co artists in Mugamoodi are Naazar who plays the role of the Police commissioner. The heroine of this movie Pooja was the runner up of Miss Universe in the year 2011.Firstly, actor Prakash Raj was also supposed to be the part of the important role in this movie but later actor Naazar was acting as the important police officer of the movie. The costume designer of Jeeva in this movie was Amirtha. The costumes have really came up very well and also it suits fine for Jeeva. The stunt masters from Hong Kong has joined the crew for the daredevil stunts performed in this movie. The fight sequences were performed in the Victoria Hall. The huge hospital set was put forth in the AVM studio and also the AVM studio was used for the stunt sequences in the movie.

The music composer of this movie is Krishnakumar who was also the music composer of Yutham Sei. The movie has already obtained its fame for the crew members such as Jeeva, Pooja, Mishkin, Narain, Naazar, Krishnakumar, Madhan Karky and Kabilan. The lyricist of this movie are Madhan Karky and Kabilan. The musical album of this movie has Both extremes of music. It has Kuthu as well as melodious songs by Chinmayee. The Mugamoodi movie had its audio launch on 20TH July 2012. The audio launch happened at Sathyam Cinemas. The audio was released by the Ilayathalapathy Vijay.
PS: The movie is about to release in the month of August 2012