Super Singer is one of the popular Telugu singing reality show / competition which is being aired in Maa TV channel. After completion of 6 successful series, presently the Super Singer 7 series is going on in full swing. The show has gain much popularity across the state of Andhra Pradesh and has become one of the favorite serials of the Telugu people.

The show aims at hunting the fresh / upcoming singers of the Telugu musical world and thereby encouraging them in the right way. Generally the competition is between the participants of two or more teams and each team has two or more participant singers. Though the competition has easy rounds in the beginning it gets tougher when it goes to the next higher levels and thus makes the competitors to dedicate more on their singing talent. Mostly the songs from the Telugu films are sung in the competition and there is an eminent panel of judges from the Tollywood music field who keep trying to correct the mistakes of the upcoming singers and thus help them in improving their singing talent.

About Super Singer 7 - the spicy series 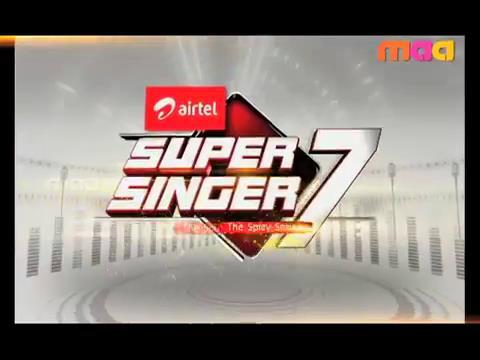 The popular lyricist of Tollywood - Chandra Bose is the neutral judge for the competition while the team leads are also involved in judging the abilities and talents of the participants. For each song the participants sing, they are scored marks out of 100 from each judge thus the score is out of 300 points. As the competition progressed, the lowest scorer from each of the two teams got eliminated were eliminated in episode 8 of the series.

In this elimination round, Deepu from Sunita's Warriors team and Dinakar from Kousalya's Chargers team got eliminated but they made a re-entry into the singing competition with the formation of a new team named the Challengers team lead by Sumangaly - the popular singer of the South. At this stage each of the three teams had four participants thus the new team had which was named Challengers team consisted of Deepu and Dinakar who got eliminated in episode 8 and with the inclusion of 2 other popular upcoming singers namely Bhargavi Pillai and Sahiti.

The program went ahead with one episode after the other every Wednesday and in episode 18, there was an elimination of the least scorer from each of the three teams. Accordingly Geeta Madhuri from Kausalya's team, Revanth from Sunita's team and Bhargavi Pillai from Sumangaly's team got eliminated. And these three singers who were eliminated made a re-entry onto the competition in episode 19 with the formation of a fourth team lead by Usha - the popular singer.

Each of the four teams consisted of three participants and all the four teams with the team leads Kausalya, Sunitha, Sumangaly and Usha marched ahead and in episode 29 once again there was an elimination of the least scorer from each of the four teams. Thus Krishna Chaitanya from Chargers team, Sravana Bhargavi from Warriors team, Dinakar from Challengers team and Bhargavi Pillai from Riders team got eliminated.

Thus all the four teams with two contestants in each team have entered the quarter finals of this popular Singing Competition being aired on Maa TV. Watch this popular Telugu singing competition which is on full swing. There is a stiff competition between the male singers Hema Chandra and Sri Krishna while female competitor Anjana Sowmya and Malavika - the Nandi Award winner for Amma Avani - are in neck and neck competition. The team positions as per the latest episode are:

The show is sponsored by Airtel and the prize money for the winning team is Rs.3,00,000 while the best male and female singers will be receiving a cash prize of Rs.1,00,000 each.