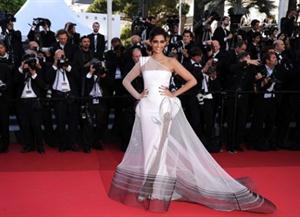 Sonam Kapoor is the eldest daughter of actor and producer Anil Kapoor and Sunita and the granddaughter of filmmaker Surinder Kapoor. She is the niece of producer Boney Kapoor, actress Sridevi, actor Sanjay Kapoor, upcoming actor Arjun Kapoor respectively. Sonam has a sister named Rhea Kapoor and a brother named Harshvardhan.

Sonam has been listed one of the best dressed celebrities. She was named as the best dressed celebrity of 2009 by people's magazine. This popular actress is associated with prestigious brands like L'Oreal Paris, Spice Mobile, Electrolux, Anant Diamond Jewelry and Mont Blanc. She has been the cover girl of the fashion magazine 'Marie Claire' in their March 2009 issue. Now there is a special news regarding Sonam Kapoor. She will be walking on the red carpet at the 2012 Cannes festival.