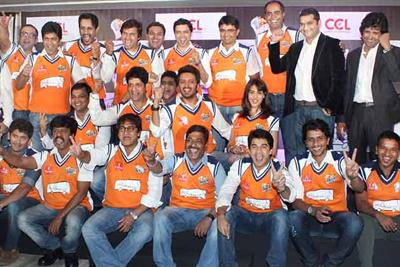 When the two big 'C's, Cricket and Cinema unites it would be a unique chance for millions of fans across the globe to watch their favourite stars on field. With the 3rd edition of CCL getting a terrific start at Kochi Jawaharlal Nehru Stadium; all eyes are onto the match to be played between Veer Marathi and Karnataka Bulldozers on 10th February 2013 at Kanchanjungwa Krirangan, Siliguri.

Owned and captained by actor Riteish Deshmukh Veer Marathi is the new addition to CCL along with - Bhojpuri Dabanggs. Playing for the first time in CCL, Bhojopuri Dabanggs had shown their power on field by crushing down the defending champions Chennai Rhinos by 5 wickets. With Veer Marathi playing their debut match in CCL is gearing up to take on Karnataka Bulldozers lead by Sudeep. As seen in the previous seasons, the Celebrity Cricket League 3 too would add all the glamour and excitement which will continue for a month.

While announcing the Veer Marathi team the owner and captain Riteish Deshmukh shared his joy of taking up the team inspired from the words of Salman Khan and Sohail Khan. The CCL would be a unique place for stars representing various film industries to join together and keep the spirit of cricket alive. The CCL season 3 had already given a competitive spirit for teams giving all the thrills as like a professional 20-20 tournament. Actress Jennelia D'souza will be a part of the Veer Marathi team as Brand Ambassador.

2013 Celebrity Cricket League (CCL) will be from 9th February 2013 and this is the third consecutive year when Celebrities from glamour world will be playing most glamorous sports of India that is Cricket. See details about the fixture, venue of match, teams and team members and the TV channel where the CCL 2013 will be aired live and website where CCL 2013 will be streamed online.

Veer Marathi 2013 cricket team (squad) members for Celebrity Cricket League (CCL) is a new addition in CCL 3. Owned by actor Riteish Deshmukh, Veer Marathi is ready to take on the rest of the teams. Mahesh Manjrekar, Rahul Gore and other popular Marathi actors will join the team for the CCL matches which starts in Kochi on 9th February 2013.