Everyone is familiar with the popular show "Master Chef India" which is being aired on television. Among the three judges the most popular celebrity judge is Vikas khanna. In this article I am sharing the success story of Vikas khanna , and learn, how hard work and patience brings achievement and accomplishment.

Vikas Khanna aged 40 is a Punjabi born on 14th of November in Amritsar, Punjab. His parents are Davinder and Bindu khanna. He has an elder brother and a younger sister making him the second child of his parents. Till the age of 13 Vikas khanna was not able to run due to his misaligned lower limbs. This reason acted as boon to Vikas khanna, as he started to spend time with his grandmother in the kitchen.

Vikas khanna started picking up interest and nuances of cooking from his grandmother and started innovating new recipes and dishes. At the age of 17 Vikas khanna started his own business as a catering firm. It was named Lawrence Gardens, and he charged rupees 25 per plate. At the same time he enrolled into "Welcome group graduate school of hotel administration" in the year 1991. During his college days Vikas khanna had the fortune to learn cooking under the guidance of several renowned chefs. Vikas khanna never looked back since then.

Apart from an entrepreneur, Vikas khanna also penned several culinary books. Few of his books are
• The Spice Story of India
• The Cuisine of Gandhi - Based on the beliefs of the Legend
• Modern Indian Cooking
• Everyone Can Cook 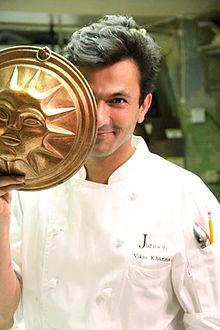 Vikas khanna is also a humanitarian. In the 2010 he started "South Asian Kids Infinite Vision" abbreviated as SAKIV. This organization concentrated in providing relief to victims of natural disasters. In collaboration with other charitable trusts like "Save the children" Vikas khanna organized several fundraising events at "The great pyramid of Giza" and "The Taj mahal" in India.

In the year 2011 he started another charitable organization called "Cooking for life" along with many renowned chefs in the world to aid the victims of natural disasters. Another feather in Vikas khanna's hat is his award winning workshop "Vision of palate" organized for blind people encouraging and teaching them to cook using their sense of taste and smell.

Vikas khanna by his principles is a democrat and supports Mr. Obama. He hosted a dinner for "Hindu American seva charities" on 29th of July in "The White house" where Mr.Obama was all praises for Vikas khanna.
Apart from winning many awards and accolades, Vikas khanna was voted as "Handsomest man alive" by People's magazine, India.

During one of his interviews Vikas khanna said that he would like to get married and have a family of his own. One of the accomplishments he himself feels proud of was when he prepared a meal costing rupees 200000 per plate. He started his business with a plate at rupees 20. I wish he goes a long way with great success and continues his charitable works and win many more awards making India proud.

Barack Obama's visit Schedule to Mumbai on November 6 and 7, 2010

During his India visit,the President of the United States, Mr. Barack Obama will be visiting Mumbai on November 6 and 7, 2010 His engagements through the two days --

Have NRI Pampering and Privatisation made 'India Shining'?

Privatisation has its origins in 1990s globalisation initiative of PV Narasimha Rao's minority government. In the fast-track Industrial and Fiscal reforms that ensued, liberalisation has been given utmost priority in all spheres of governance and economy in order to install private sector in a big way, pushing public sector priorities aside.

In this article we will learn about different types of cooking oils available in market. We will find out which oil is healthy for us, what its benefits are and what precautions one should take while using particular oil for cooking. We will also know about the correct way of using our cooking oils.

Indian Cinema is celebrating the 100th year of cinema. This article is a short flashback on the stories behind world cinema and the great Indian Cinema. How Cinema raised from the hands of Lumier brothers to the technical brilliance of the recent era is a matter of discussion and this article explains the answer for the same.

Hair Transplant and its cost in India

This is the information about hair transplant and its cost in India. In the present situation most of the people are bald. The number is more in male than female. There are many dermatological methods to grow hair in bald head. Hair transplant is the final method people choose after getting all hair growth treatment. This is a permanent solution for baldness problem.