Director Anindya Chatterjee looks busy shooting his latest and upcoming movie 'Jhumura'. When it comes about direction, he is no longer a new name in the Tollywood scenario. He has proved his spunk before in telefilms, documentaries, add films, corporate films, etc. He has the repute of working as an assistant director under the well-known director Buddhadeb dasgupta. For instance, he was an assistant director of Buddhadev dasgupta in the movie 'Janala'. Besides, being the grandson of the famous actress Sabitri Chatterjee he has earned big name through his tireless and hard work. 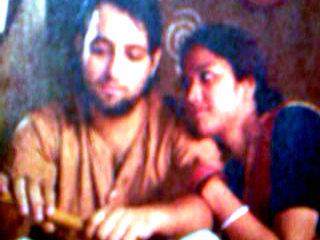 This feature film bases on the unique love story of a boy and girl living in a village. This love story would give the spectators with the opportunity to visualize and feel the stories of other times as well. It screens with the backdrop of Jhumur music and its refined culture that covers the entire part of the feature film. Though the Jhumur song is a performing act, but the question how this art got transformed with time artistically revealed through the storyline of this feature film. Mythic Jhumur music and dance of the Purulia district are the main subject of the story apart from being the unique love story. A lot of time devoted to research before crafting of this super feature film. Shot in the interiors and corners of the Purulia district of Bengal this movie has lot to offer to the masses. Non-stop shootings carried out in the locations of forests, mountains, rivers and hills. A ray of regular life Jhumur artists performing either on or off the screen is one of the characteristic features of this feature film. Sabitri Chatterjee acts as a character who describes the full story in the feature film. The description may make the people think for a moment that she describes her own life story. As planned before, this film may make its way to the several national and international film festivals. Finally, it would release in the theaters for the masses.

This film is the much expected one of the fresh Tollywood movies this year. It is sure that this movie release would be among news, and buzz once it hits the box office. The extensive time spent in the research work, the effort made to bring out the best from the artists, the inclusion of real Jhumur artists and an impressive direction would bring the most fruitful result in the future. Besides, the message it conveys about the Jhumur music art and how it got influenced with the changing time would be treasured in the heart of the fans for a long time. Let us put our fingers crossed for the movie to hit the theaters soon so that we may have the amazing opportunity to roll the eyes on the movie that promises to bring in the complete package of music, art, culture and breeze of love in it.