The Tollywood or the Bengali film industry has revived many folds from what it was before and the industry still glides smoothly. One big testimony of this fact is the recent upsurge and the success of the new actors in the industry. The competition to out perform whether in direction, action or music has added colored feathers to the industry and its huge prospects of success. Commercial films of different dimensions and class get produced more than before. It has upcoming movies in the sleeves that promise a lot and even expect to do good business overseas sometimes. Movies like Jhumura, Rongbaaz and Gondho slated for a release within a few months. Learn more about the upcoming movie Gondho and its cast, crew, plot and preview from our website.

Producer Nispal Singh Rane is making the headlines for two prime reasons these days. First, because of being a producer of much awaited Bengali film "Rongbaaz" of the year and secondly, because his wife, Koyal Mitra plays the lead role in the film. Since, she arrives in the acting arena once again after her marriage it definitely brings in a good news for her fans. The much awaited movie of the year brags about some of the great action stunts in the movie by the fight master, Aleen Amin and its on shoot locations at Bangkok. Yes! Aleen Amin is the same action master who captivated us with his action stills in the movie "Race." The movie slated for a release on the 11th October, 2013 on the festive occasion of Maha Saptami. 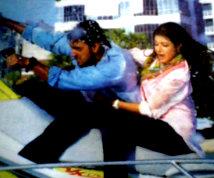 Raj gets behind the bars for ten years because of some criminal activity. When he comes out of the bars he becomes a rongbaaz. His father killed when he was young. From that time he had the tendency of revenge in his heart. His sole aim in life now to kill the person who destroys his family. Now, after getting released from the lockup he searches for his mother. While on the hunt, he discovers the person who killed his father lives a settled life in Bangkok. The culprit is a don and Raj goes to Bangkok for a revenge. However, he falls in love with his daughter, Madhurima. To experience the thrill and excitement you have to go to the theatres once the movie hits the theaters on 11th October, 2013.

The movie shot at the wonderful sites of Bangkok in the Vatican city. Besides, major scenes are also shot in the Bellagio of Italy and Komoti of Milan. This is the first Bengali movie for Allen as fight master. No other Bengali action movie has the perfect combination of action, romance and comedy before as this movie. Moreover, the hot and crispy pair of Dev and Koel Mullick has given string of hit films before. Though, a remake of the Telugu film, "Chirutha," but it is all set to win the hearts of the audience at the Durga Puja festival.