Though the name Khiladi remind us the Akshay Kumar starer blockerbuster movie, but this one, a brand new Bengali movie on the offering for viewership. It would land on the box office floor on 18th October, 2013 after the pious occasion of Durga puja. Other Bengali movies releasing on the event is Mishor Rohossho (Mishawr Rahasya), and Rongbaaz. Learn more about the movie Rongbaaz and its cast, crew, story and soundtracks from our website. Produced by the Eskay movies, Khiladi center on the Durga puja festival of a traditional Bengali family. The story begins from the Mahalaya and reaches its climax on the Vijaya Dashami. Director Pritam Pali directs the movie encompassing the greatest festival of the state West Bengal. Though he has directed in movies before, but this is the first venture as a director in a Bengali feature film. 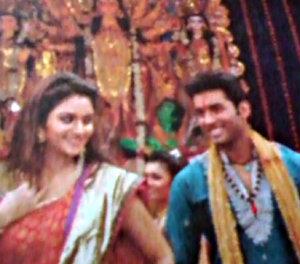 The story revolves around a traditional Bengali family. Aditya Narayan Chowdhury is the head of the family. Since the last 25 years the family has not organized any Durga Puja and stood away from it. There was a time when the event celebrated with great pomp and grandeur by the family. The reason behind it was because the beloved sister of Aditya Narayan left the home and went away with her muslim lover, Mohsin Khan. After that event the Puja celebration never took place in the family and Aditya Narayan could not forgive her sister for this deed. Aditya Narayan went to Pundits who tell him to start again the Durga Puja celebration as this would bring peace and prosperity in the family. Now a young purohita or a pundit, Krishna arrives in the family. Krishna is the son of Saraswati and Mohsin Khan and his real name is Sulaiman Khan. He disguises himself as a purohita and enters the family because he has the good intention that his mother gets acceptance once again in the family. Here, he falls in love with an orphan Puja who lives in the family. What next? Well, to take part in the climax you need to watch the movie in one of your nearest theatres.

This romance and comedy movie with a pinch of action and a social message would create a new trend for the Tolly movies. The lead role players look fresh and energetic and they both have proved their mettle by giving some good performances in a few movies. The film got shot overseas in Thailand and in many places of Kolkata including Zoka. It would release after the great event of Durga puja and expects grand opening. It would screen on single screen as well as on multiplexes around 150 theatres.