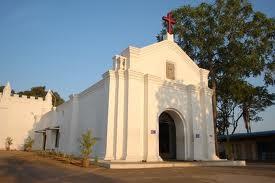 The Austere Church is the church located in St.Thomas Mount it is a square white structure with two side wings. There are many reasons based on which this name was given to the church. There are also predictions available to describe the greatness of St. Thomas church. St.Thomas is one of the apostles of Jesus Christ who came to Chennai and preached about Jesus Christ. He was later killed and in his remembrance this church was built. The two main holy things kept in the church are carved granite cross at the altar called the Thomas cross and an ancient oil painting of Marry and child. It is believed that this is one of the seven paintings of St.Luke an apostle of Jesus Christ. The walls are decorated with paintings of suffering of Jesus during his death. 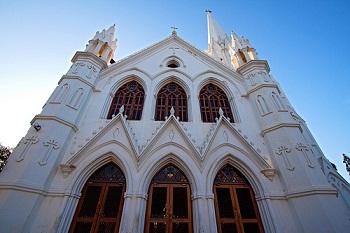 Chennai santhome cathedral basilica was built over the body of St. Thomas one of the apostle of Jesus Christ. Some remains of the corpse along with a pot containing sand moistened by his blood, the knife with which he was pierced and also a part of his bone has been preserved in the crypt. A statue of Virgin Mary (mallai matha) which imported from Portugal is kept in Santhome Cathedral Basilica adds to its features. The Santhome church is the erection of the architecture that corresponds to the Gothic Style. The santhome cathedral church also consists of stained glass and 14 wood plaques that depict St. Thomas' which is encountered with resurrected Christ. The church has gained good importance and the people from various parts of the world come to visit the santhome Basilica Church in Chennai. 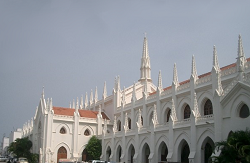 St. Mary's Church, which is the first Anglican Church in India, is very popular in Chennai City. It is also one of the attractive churches that are visited by the people from Chennai and also from various other parts of India and also world. The church has its own historical importance. This church has a similar structure like churches of Rome. It was built by the soldiers in Fort St. George in 1680. The church premise is about 90 ft high and its roof is bomb proofed. It consists large painting of the last supper, bible of 1660 AD and silver plates. Today it needs some maintenance but the government along with the priest of the church is taking care about the reconstruction work. It is the first ever historical church standing with a great significance along with the other forts in Chennai. 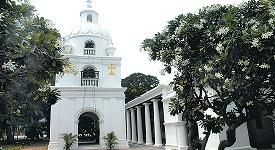 Armenian Church is another excellent and old Chennai church. The churches that are old in Chennai have its own historical importance and are also very popular among the people of Chennai. Armenian Church consists of a white tall wall facing the street and a triangular shaped large end wall between two roofs called Dutch gable. It is located in Georgetown. The church has spacious grounds, a large six bells at the top part of the tower in the middle. It is ancient, built in 1772 by American merchants. This church has 350 tombstones of the Armenians who lived here. The six beautiful bells peal each morning to summon the faithful solitary Armenian family who double as caretakers. 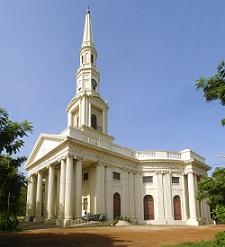 This church is located in Poondhamalee High Road in Chennai. The church was built during the Scottish reign in Chennai in the 19th Century. This church was built for the Scots who were protestant community. The church is unique as it has a circular form of design and it stands amid of a large compound of trees. The church consists of 16 fluted Corinthian columns which support its circular interior and its dome is painted with deep blue with tiny stars which resemble the skies in Scotland. The pews and other woodworks are made up of mahogany and the columns in front give it a classical touch. Visiting such historical churches in Chennai also gives some good satisfaction and peace to the mind.

The address details of best church in Chennai

Chennai Santhome church is one of the oldest Church that are present in Chennai. The greatness and importance of the Santhome Church is known to the people as such people come to Church for the purpose of getting a good piece of Mind. This article provides details on How the Christmas festival is celebrated in the Santhome Cathedral Church.

Christmas celebrations and the History

Christmas cards and Christmas gifts are very popular during the time of Christmas and also there will be some attractive decorations done in the Christmas time. This article provides details about Christmas decorations.