has been bracing up for the Mahasivaratir Brahmotsavams which are going to start from March 3 and will conclude on March 13, lasts for 11 days. Srisailam temple is situated in the Nallamalla forest area in Kurnool district. Brahmotsavams at Srisailam temple will be held twice in a year, one during the Sankranthi festival and the other during the Mahasivaratri festival. More than 10 lakh devotees are expected to visit the shrine during the Mahasivratri festival. Special buses will fly from difference parts of Andhrapradesh and even devotees belonging to Karnataka state will be present in thousands during Mahasivratri.

Government officials belonging to endowment department have made good arrangements for devotees and priority is given in providing drinking water, sanitation and transportation facilities. Here below you can have the details of various poojas and vahanasevas performed during the Brahmotsavas period. 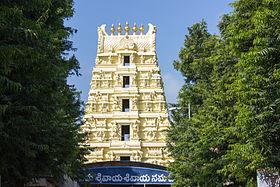 Lakhs of devotees from all parts of the India will visit Srisailam temple during the eve of Mahasivratri Brahmotsavams and offers prayers to Lord Siva. Even though the temple officials have made all necessary arrangements devotees will face problems due to the heavy rush.