A Review on the Tamil Movie Sundarapandian

This is one of the latest Tamil movies that released last week and it is getting some mixed response as of now from the audience. It is a typical Tamil movie that depicts the life of a person in the villages of Madurai. Though it is just a love story the director has tried to bring in some comedy, friendship, love and trust in a single movie. I would rate it as 3.5 out of 5, though the movie was directed by a new director named Prabakaran it doesn't seem to be his first film because of the way he has directed. The movie is one of the typical Tamil movies that Sasi Kumar is known for. 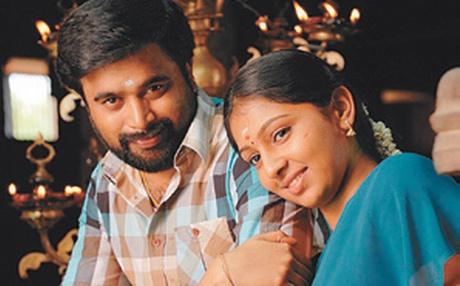 Performance of Sasi Kumar in the movie

In this movie Sasi Kumar has tried to attract the audience by his beautiful performance where he appears as a person who has completed his studies just before some 5 or 6 years. During his College days it seems that he and his friends were ruling the college and were like leaders for the people in the bus and if any incidents happens in the bus it is said that he and his friends would solve them. Sasi Kumar is well supported by his family members especially the oldies in the family like Grandma's. He has managed to come in a beautiful role which is far from his real personality but manages to act well filing the gap by beautiful performance.

Star cast of the movie

The lead role is done by Sasi kumar has did many successful movies like Subramaniapuram, Nadodigal, Easan etc. he has just acted two or three movies but is still the best actors as far as Tamil Cinema Industry is concerned. The female lead was done by Lakshmi Menon and the movie was directed by Prabakaran, Music was composed by N R Raghunathan. The movie was supported by supportive roles of Soori and Vijay Sethupathi.

Story of the Tamil movie Sundarapandian

The movie starts with the dialogue about the girls in Madurai saying that though there are many families that kill female children's at the birth itself, the same family worships the girls like a goddess and give more respect to the girl children's and there are many families that even go for the extend of murdering if some bad name is caused to the girls in the family. There is a murder in the very first scene where a person is murdered at the forest area by three people for looking at the girl of their family. The introduction of the hero comes with the song "Kondadum Manasu" where a group of oldies try to state the characters of the hero.

Soon the friend of Sasi Kumar brings a person along with him who falls in love with the female lead, soon Sasi Kumar and his friends try to help his friend in succeeding in his love. But things don't work really well and after so many tries his friend fails to open out his love in front of the girl. At one stage Sasi Kumar faces another problem as his another friend brings a fellow with him and says that he also loves the same girl which his friend already loves. Soon they discuss the problem and Sasi Kumar suggests Appu Kutty the other person loving the girl to try for the first 30 days and incase he fails they state that he should not come in the bus or disturb the girl thereafter.

In the run he fails and the chance to Sasi's friend comes but the girl is not interested in that friend of Sasi rather she is very much interested in Sasi Kumar as he has already proposed her in the school days itself though it was a failure.

At one stage the girl refuses Sasi Kumar but after so many years the girl now looks for Sasi and sasi is trying to help his friend for his love for the same girl. Soon Sasi tries to state his friends love to that girl but the girl tells about his love on the hero. Then Sasi also falls in love with that girl and the love story starts and as this is known to the other person Appu Kutty, he tries to mock the heroine and the hero comes to know about this and in a small quarrel his friend pushes Appu Kutty from the bus and the Hero accepts the punishments and goes to the jail for 15 days.

After his release he tries to meet the heroine but the Family members of the heroine plan to arrange a marriage for the heroine to his mother's brother Jagan who is a friend of Sasi Kumar during his college days. Jagan tries to behave like a person supporting his friend Sasi but tries to murder him but fails in various attempts. Soon Sasi Kumar's father tries to convince the father of the heroine and succeeds in that.

As the marriage plans are starting for the hero and heroine, the friends of the hero who are cheated by Sasi try to kill him but Sasi escapes the death narrowly and attacks the others including his friends who have turned towards him and tried to kill him. At the end Sasi succeeds in his love and neglects his friends thereafter. The final touch of the movie is the dialogue that states "even if you are stabbed by your best friend you should not shout" and this dialogue got lots of appreciation right in the theater with lots of whistles.

The movie has managed to get some critical appraisals from the top companies like Sify, IBN, Behind woods and Zee news. I think there are many who are in favor of the film and only a few critics have made something like a negative mark for the movie. I think this movie would definitely do a good job here in Tamil Nadu and would become one of the major hits as of this year.

The datails of the Tamil actor Vikram upcoming movie Rajapattai

This is the article about the Tamil movie 3 which is going to be released in the theaters all over Tamil Nadu on 14th January 2012. This movie would have the lead roles played by Dhanush and Shruthi Haasan and it is directed by Aishwarya Dhanush.