This is the movie that is like a breakthrough for Vijay after a long time. Vijay had been facing so many negative comments and failures in the past over a year or two. It is noteworthy that after Vijay's Pokkiri his movies like Adhi, Azhagiya Tamil Magan, kuruvi, Villu, Sura and Vettaikaran had got several negative acclaims. In the recent times though he had two hits like Nanban and Kaavalan that were remakes of the movies from other language he has managed to give a big hit this time with his Thuppakki.
As per the current scenario the movie has been getting positive reviews from almost everyone. The movie has been rated very good by most of the critics. I would rate the movie with 3.5 out of the scale of 5 and would suggest the movie to be viewed by all. 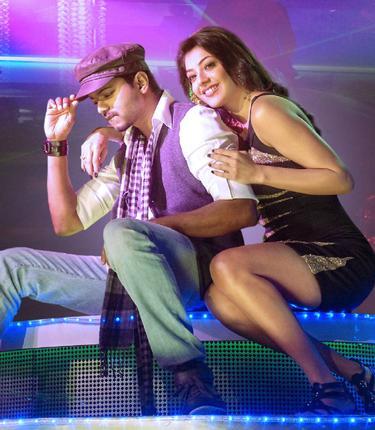 Star cast of the movie

Vijay- The hero of the movie with the name Jagadheesh who is doing Army personnel in the movie
Kajal Agarwal- The female lead named Nisha and doing a Boxers role
Jayaram- Doing a guest role as a superior officer to Vijay
Sathyan- Doing a friends role of the hero and a policemen who supports Vijay
Vidyat Jamwal- Doing the villain's role in the movie and the leader of a gang also called as Sleeper cells.
Harris Jayaraj- Music director of the movie
A.R. Murugadoss- Director of the movie

Current scenario of the movie Thuppakki

The movie was released on Deepavali with other movies Podaa Podi and Ammavin kaipesi. Though as expected the movie has surpassed the other movies that released along with the movie and is doing well in the box office as of now.

The movie has managed to earned more than 20 crores in the first three days itself and has left behind the previous records in the box office. This movie seems to be the biggest hit of this year as no other movie did well as of this movie in the past though there may be a tough competition soon as the movie Vishwaroopam is likely to be released next month.

Story of the Movie

The movie starts with Vijay's family waiting in the railway station waiting for the arrival of Vijay from his camp. But as the arrival or Vijay is getting late his sister calls him and knows that he is playing game with his friends. Vijay comes to the screen as never seen before where he fights with a co worker and wins against him. Soon he also arrives at the railway station after a song. His parents take him directly to Kajal Agarwal's house see the bride for Vijay.

But after seeing the bride on the way of returning to home Vijay calls back and states that he is not interested in Kajal as her taste is not matching with that of Vijay and also states that the girl is old fashioned, shy and afraid of everything. But on the contrary, the girl is a college boxer and displays a threatening performance by striking her opponent with a single punch in the presence of Vijay.

Vijay after seeing this is impressed with the girl but the girl rejects at the start though accepts soon. But in the interim Kajal parents see another groom for Kajal and Kajal also accepts that and that groom is Jayaram who is a superior officer of Vijay in the camp. But though Jayaram also likes the girl he forgives the girl for the love of his own relation.

On the other hand Vijay goes in war with the sleeper cells in Mumbai which starts with an attack in Bus where he meets a terrorist who blasts a bomb. Soon Vijay tracks the people i.e., the sleeper cells who are working for the Villain Vidyut and gives a counter attack by killing 12 sleeper cells at the same time with his department friends at various places of Mumbai. This makes the Villain angrier and makes him to come out.
Soon he comes out and starts out with an impressive plan which is tracked by Vijay who finds the place where the Villain kidnaps five girls including his sister with a dog. Soon Vijay gives a fantastic fight where he kills several other sleeper cells and protects the girls.

This makes the Villain angrier and so the Villain finds the crew that took his 12 men at the start and gets behind them with each man followed by a sleeper cell. He also kills one of Vijay's friends who is dining in a restaurant and asks Vijay to come out and show himself or he would blow up the others too. This makes the hero come out and show himself but Vijay plans well to kill all and himself too which though opposed by his friend is later supported.

Vijay inserts a transmitter in his body which can be tracked by his friends and demolishes the ship that contains all the records and activities to be carried by the sleeper cells. However Vijay escapes the death with the Villain as he had to kill the minister who is behind all these things which he finds later in the ship. Vijay Kills the Villain with the attractive words "Suspense oda ve Saavu" and also finds the minister and kills him by threatening him and look as if the death was a suicide and not a murder. At the end Vijay meets with his family and the heroine's family and leaves the place in a train to his camp.

The Director Murugadoss has done a remarkable thing by getting a story that can attract almost all the audience. I would say that this was a team effort and the entire crew should be credited for this success. Vijay has had a big breakthrough with this movie and hope he continues the same in the years to come. The Dialogues have been penned well in right places with is a added advantage to the movie.