CCL 4 (Celebrity Cricket League) was started today (25 January 2014) with the inaugural match played between Chennai Rhinos and Mumbai heroes at Dr DY Patil Sports Academy, Mumbai. In the first match of fourth edition of CCL 4 Vishal led Chennai Rhinos beat Sunil Shetty Mumbai heroes by six wickets. Mumbai Heroes who won the toss elected to bat first and scores 165 in 20 over with sparing five wickets while Chennai beats the target by scoring 167 for four wickets in 19.5 overs . Opening batsman A Shivdasani has scored 79 out of 60 balls for Mumbai heroes which help them to set defensive target of 165 against Chennai Rhinos in their inaugural match. Shivadasani has scored 6 fours and 4 massive sixes in the first fifty of the fourth edition of CCL (Celebrity Cricket league). Captain Vishal has taken 3 wickets for Chennai Rhinos. Chennai also started well and the good partnerships afterwards help them to win in the first match in CCL. Sharan who played an explosive innings in the middle by scoring 47 out of 27 balls with 2 fours and four huge sixes has changed the game into the route of Chennai Rhinos. Sharan bags the man of the match award in the first match of Celebrity Cricket league season 4. 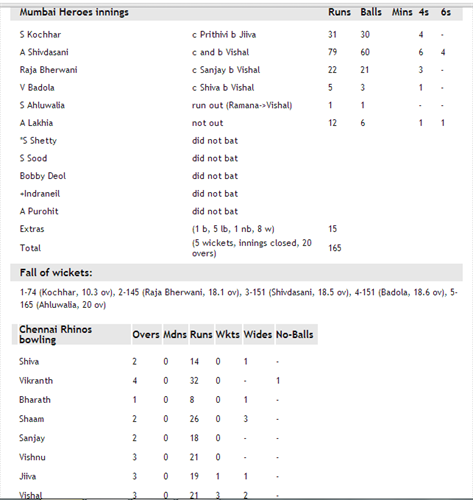 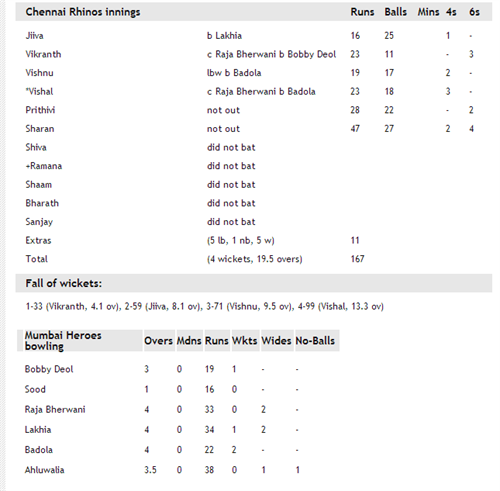 You can also watch Chennai Rhinos Vs Mumbai heroes match highlights video on you tube.