Micromax Canvas 4 and Lumia 720 have different operating systems.
Operating system of Canvas 4 is Android 4.2.1. This is the latest Android version. And there are rumours that it can be also be upgraded to the next Android version too. The advantage of Android OS is that there are large number of apps available. If you are a person who wants thousands of apps for your smartphone, then this may be a good choice. However the cons of Android is that the user interface offered by Canvas 4 is not that beautiful.

However, the OS of Lumia 720 is Windows 8. So it is a Windows phone. Windows 8 is a new OS and it has created its own space. Negative point about Windows 8 is that it does not offer that many apps that Android offers. But wait! These days the apps developers are getting interested in making apps for Windows 8. Another important point is that all the important apps like WhatsApp, Kindle, Angry Birds are available in Windows 8. My opinion is that if you are a person who does not need so many apps, you can go for a Windows OS. The best point about Windows OS is that you get Microsoft Office with it. And you can always sync your documents. That's not all. You get free storage in Skydrive.

My verdict: Both pros and cons of Android and Windows 8 are mentioned. It depends on the user which one to choose. 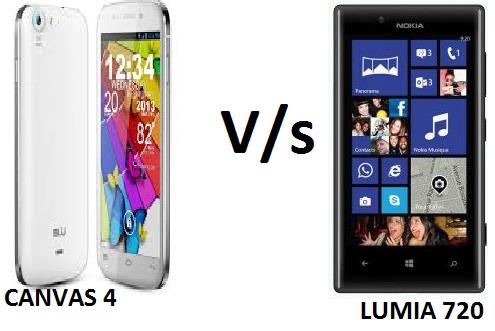 Lumia 720 has single SIM slot. But Micromax Canvas 4 has dual SIM slot. So you can use two networks in Canvas 4. There is no need to carry another phone. Both the networks will remain active all the time. A smartphone with two SIM cards is a factor that gives more points to Canvas 4.
My verdict: Canvas 4 wins because it has dual SIM. For people who travel a lot, need more than one network. For them, a dual SIM phone is a necessity. Wait! It's a dual SIM smartphone.

Processor and speed of Lumia 720 and Canvas 4

If we compare the battery life of Lumia 720 with that of Canvas 4, then Lumia 720 wins. This is quite certain because Canvas has HD display and Quad Core processor. Lumia 720 conserves power by the help of low specifications of RAM, processor and display. This is evident from that fact that both Lumia 720 and Canvas 4 have 2000 mAh battery.
Verdict: Lumia 720 better. If you are a person who travels more and more, then you need a phone which has a battery of longer stamina. So Lumia 720 should be your choice. But you has to compromise with performance. you can also increase the battery stamina by using 2G instead of 3G and switching OFF the WiFi.

Lumia 720 has NFC wheras Canvas 4 doesnot. NFC is the future of near communication. You can connect two NFC smartphones by just touching them with each other. In the near future, you will find that payments at malls will be done through NFC.
Verdict: Lumia 720 has it and so it wins.

Between Lumia 720 and Canvas 4, Canvas 4 has a better RAM. RAM of Canvas 4 is 1 GB wheras RAM of Lumia 720 is just 520 MB. This is the biggest con of Lumia 720. These days smartphones have a minimum RAM of 1GB.
Verdict: Canvas 4 wins. No hanging, delay in running big apps or games.

Canvas 4 has a bigger screen of 5 inches. Lumia 720 screen size is 4.3 inches. No doubt a 5 inch screen is better for view. Watching movies in a 5 inch screen is way better than a 4.3 inch screen.
Not only the size, but the screen resolution is better in Canvas 4. The screen resolution of Canvas 4 is 1280 x 720. Screen resolution of Lumia 720 is 480 x 800. This means that Canvas 4 has better display. The display of Canvas 4 is sharper and crispier.
Verdict: In terms of diplay sie and quality, Canvas 4 is the clear winner. However, you should also think about the fact that a 5 inch device is not so easy to hold compared to a 4.3 inch. So first grab a 5 inch phone. Try to use it. If you are comfortable, then only you should consider buying it. 4.3 inch phones are easy to use with a single hand only.

Primary camera: Canvas 4 has 13 MP, whereas Lumia 720 has 6.1 MP.
Secondary camera: Canvas 4 has 5 MP. But Lumia 720 has 1.3 MP
Lumia 720 has Carl Zeiss optics, autofocus, flash type- LED, geo tagging and video recording at 720p at 30fps.
Canvas 4 has similar featues. But it doesnot have Carl Zeiss optics. It has touch focus, smile detection and panorama view. The video recording quality is better that is 1080p at 30 fps. A secondary camera of 5 MP is also another factor. If you are a person who does lots of video calling, then you should consider this phone.
Verdict: Canvas 4 seems to offer a lot more than Lumia 720.

Some more comparison in short

Pros and Cons of Micromax Canvas 4

Pros of Canvas 4 are

1. High megapixels: 13 MP primary camera is an excellent feature. A secondary camera of 5 MP is also another important feature of Canvas 4.

3. Good battery: Battery has good stamina. It is a 2000 mAh battery and offers a lot for atleast 2 days.

4. Touch screen is good, no delay in response.

5. Quad core processor is the best aspect of this phone at such a low price.

Cons of canvas 4 are

1. Quality of body of the phone is not that good. Lots of plastic used whose durability is doubtful.

Pros and Cons of Nokia Lumia 720

2. Beautiful design: the design of the phone is really cool. It looks distinct and different from other phones.

3. Colorful cases: Lumia is all about colors. You can change the case color as per your wish.

2. Apps are still less in number in Windows store.

I have sumarised the comparison below for better analysis.

Summary of the comparison

Various online websites are selling Canvas 4 and Lumia at cheaper price. Currently the price of both the phones are in the 16000-17000 range. Good websites from where you can buy these phones at discounts are Flipkart, snapdeal and Indiatimes.

Recipe of Spicy Prawns Vadai – A perfect combination with tea

Vadai or Vada is a very common South Indian snack. There are different types of vadais such as Uzhunnu vadai, parippu vadai, ully vadai etc. In this article I am going to explain about a non vegetarian vadai, that is chemmeen vadai or Prawns Vadai. Go through it and enjoy cooking it as well as having it.

How churches raise their funds to support their activities.

In this resource article we are going to learn how a church raises its funds. The various modes of fund raising methods including special fund raising events , pledges taken by worshippers, giving at freewill , sale of articles and identifying church sponsors are some of the methods discussed here.

In this article, I will explain about few food items which should not be eaten after doing exercise as they can be harmful to your health and fitness. This article also contains few eating tips which should be followed wisely after doing your daily exercise.

Hair Transplant and its cost in India

This is the information about hair transplant and its cost in India. In the present situation most of the people are bald. The number is more in male than female. There are many dermatological methods to grow hair in bald head. Hair transplant is the final method people choose after getting all hair growth treatment. This is a permanent solution for baldness problem.

Chennai express is the latest movie directed by Rohit Shetty starring Sharukh Khan and Deepika Padukone. It is stated for Diwali release in 2013 and the this article is a short review on the same album composed by Vishal Shekar combo.