Bhil is the 3rd biggest tribe of India and also the 2nd biggest tribe of Madhya Pradesh. The word "Bhil" is originated from a Tamil word "Villuvara" which means "Bow". The name Bhil is give to this tribe due the reason that they are very good archers.

The Bhil tribe is found in many areas of India and they are:


In Madhya Pradesh Bhil tribe is found in many districts and the majority is in the western part, the names of the districts are:

Bhil tribe has many sub casts and they are mentioned below:

Bhil tribe forms a patriarchal society i.e male dominated society. Male use to be the head of the family and of the society too. Bhil tribe follows the system of Gotra in which marriage is forbidden within the same Gotra. Every village of Bhil has a leader who is honored with the title of "Tadvi". The head of the village is known as sarpanch or Badwa. The area where Bhil use to live is called as "Falya". Bhil's follows the system of joint family.

Bhil tribe adopted various methods of marriage, by name they are mentioned below:


From the above listed marriage Mangni Marriage is considered to be the best marriage system within the Bhil type.
Bhagoria & Naratya marriage system is very common within these two sub casts of Bhil tribe and they are: Bhilala and Barela.
In Bhagoria marriage system a fair is organized seven days before the Holika Dahan in which young girls and boys choose their life partners.

Bhil women are expert in paintings, the beauty of their art can be seen on their dresses, bags, purse, chomal, galan etc.. In houses Bed, Doors and windows can give us a very good idea about their art. 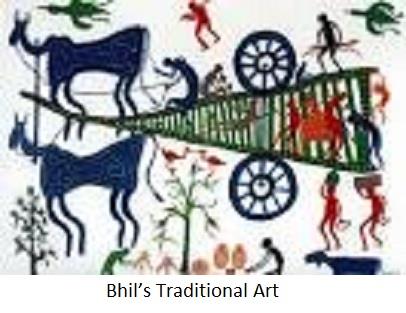 (This image is taken from ignca.nic.in)

Bhil tribesmen are generally engaging themselves in agricultural works. They also collect forest products and sell these products in cities markets in order to earn their livelihood. These people also work as a laborer in cities. Money lenders misuse the innocence of these people; they give them loan on a very high rate of interest which they are unable to repay.

Bhil's are highly influenced by the Hindu culture. Bhil's have started worshiping Hindu gods and goddesses like:

Bhil tribe is mainly the worshiper of Mahadeo. They also worship their Bow as god.

They use to speak "Bhili" which is the combination of Rajasthani, Gujarati and Marathi languages.

The male of this tribe use to wear half sleeves shirt, safa on head and dhoti on waist. Some men also wear truss.
The women of this tribe wear a fabulous coat just like the Rajasthani women and call it "Ghagra. 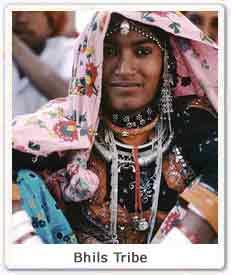 (This image is taken from ecoindia.com) 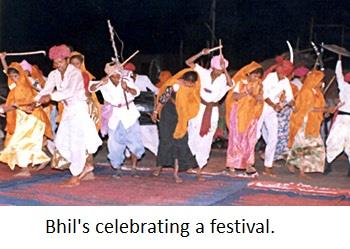 (This image is taken from indianetzone.com)
As they worship Hindu Gods and Goddesses therefore they also celebrate Hindu festivals like:

But their main festival is:

The Korku Tribe of Madhya Pradesh

The Sahariya Tribe of Madhya Pradesh

Sahariya tribe comes under the special backward tribes of Madhya Pradesh. It is quite worthy to know about this tribe from the MP PSC point of view. This article contains the information about their location, economical status, festivals, religious belief, habiliments, social formation, physical appearance etc… So read it and gain the knowledge.